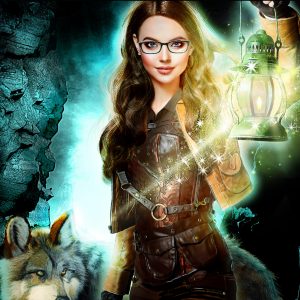 Are you ready to dive into a brand new adventure? Meet Olivia in this excerpt from Wolf Dreams….

Do you remember your first date? The rush of excitement. The fumbling awkwardness. The way the boy bent down for a kiss, prompting your teeth to bite all the way through his cheek.

The blood. The ensuing faintness that progressed into a prehistoric vision. The visit to the emergency room. The awfulness when your father arrived to pick you up.

Okay, maybe my experience wasn’t precisely average. Normal is not my middle name.

“Olivia Nicole Hart!” my father raged as he took in the red streaks smearing my face and the wildness of my dilated pupils. His hand lashed out just shy of striking me, and that danger provided my inner monster permission to steal my body a second time.

Don’t touch us, she hissed, her voice raspy within the confines of my body. Then she leapt at him—I mean, I leapt at him. Sometimes it’s confusing when my body does things I don’t ask it to do.

But it was my manicured fingernails that scraped a long welt of red down the side of my father’s cheek and neck. It was my teeth that bared as if they intended to rip out his throat.

Blackness hovered around me, the vision attempting to pull me under before I could commit patricide. As if it wasn’t bad enough that I housed a monster, I lost my entire grasp on reality every time the beast came to call.

But my father was ready for me. “Get in the car,” he demanded, voice so cold my feet scurried to obey him. And, just like that, monster and vision both released their holds.

I shivered as I attempted to clean up their messes ten minutes later. “I’m so sorry,” I whispered as we drove out of the city. I’d used up half a box of Kleenexes wiping blood off my body, but I still felt like I’d been rolling around in offal. “I didn’t mean to.”

“The doctors warned us what would happen if you didn’t take your medicine.” My father—or Dr. Hart, as he preferred to be called—didn’t bother turning down the radio while he berated me. Didn’t take his eyes off the road as he pulled the hated pill bottle out of his pocket and tossed it into my lap.

It landed with the weight of lost potential. The promise of dulling the world to protect me from my own animal nature.

No, my monster growled. Starbursts flickered at the corners of my vision.

I twisted off the lid and swallowed them dry.