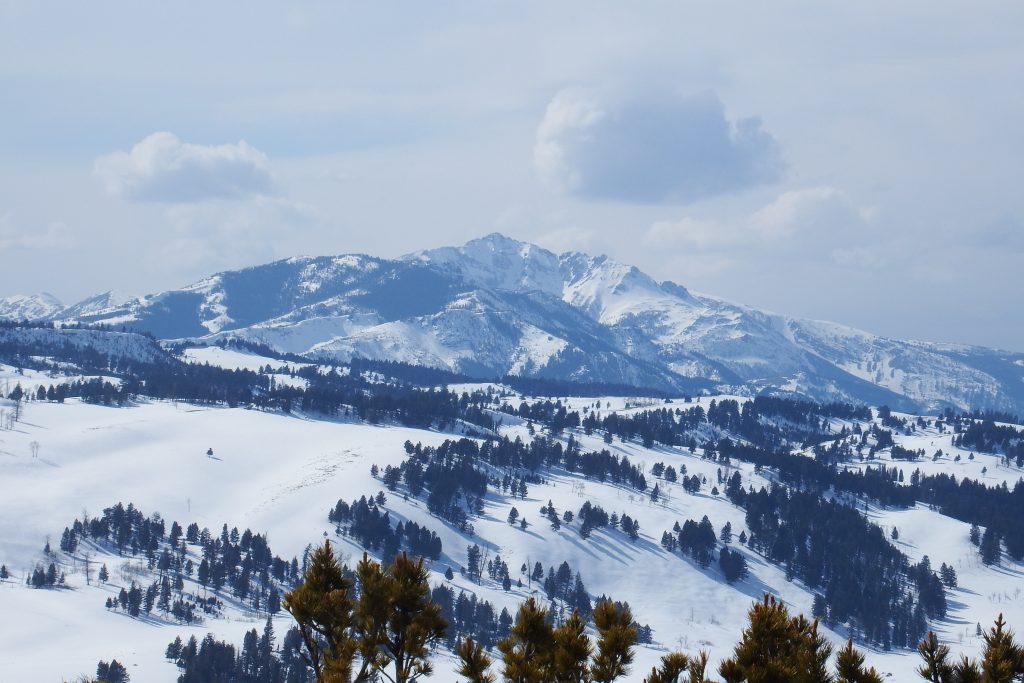 Today was our first full day in the park and we were on a mission — finding wolves. On the surface, this sounds utterly impossible. Currently, there are between 80 and 100 wolves living in the 3,741 square mile park. And, okay, so half of the eight packs live in the north range where we planned to be looking. Still — when we headed up into the mountains at dawn, the task felt reminiscent of seeking a needle in a haystack. 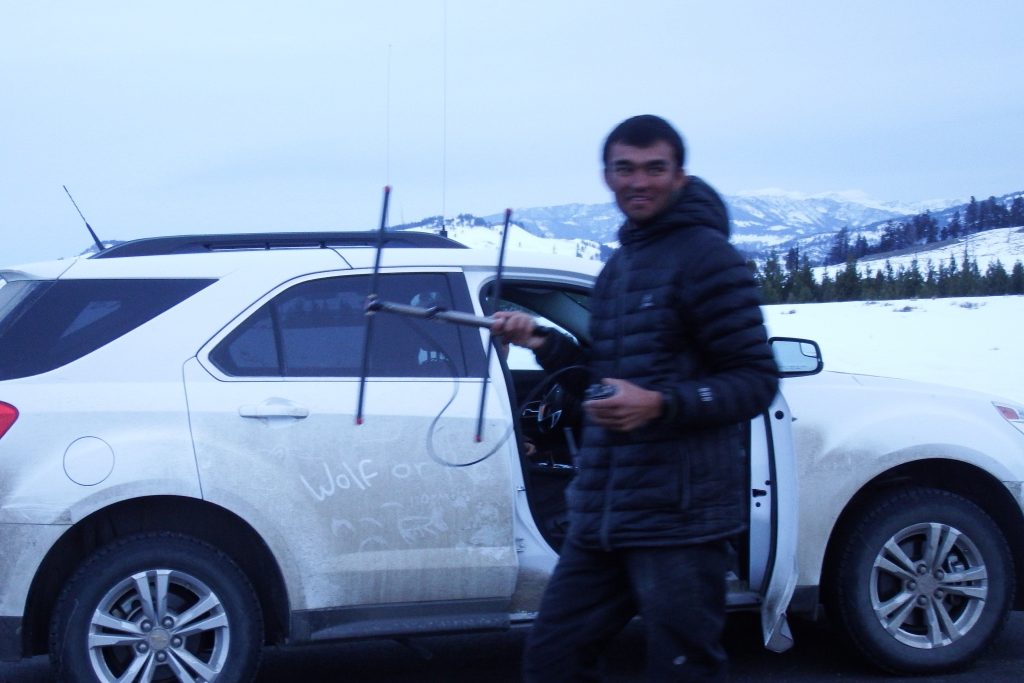 Enter the Wolf Project — a team of hard-core scientists who spend every daylight hour at this time of year tracking Yellowstone’s wolves. At least two wolves per pack wear radio collars that can be picked up as far as five miles away if the terrain is in your favor. On the other hand, if the wolves are hiding down in a ravine, you might not get a signal even if you’re only a mile out. 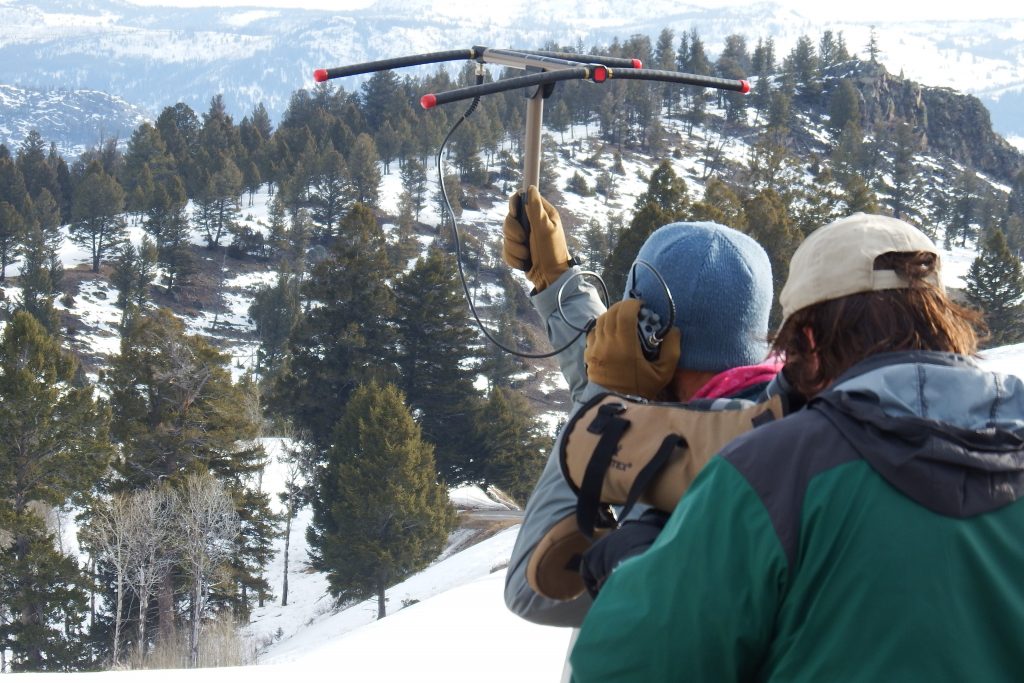 Wolf Project did get a signal pretty quickly…but the wolves (Junction Butte Pack) were hiding in the trees. After hours of hopping from spot to spot on the road, setting up scopes, and seeing nothing, our fearless leader caught a glimpse of a lone gray wolf running across the snow…and then the wolf was gone before any of us could find it with eyes, binoculars, or scopes. 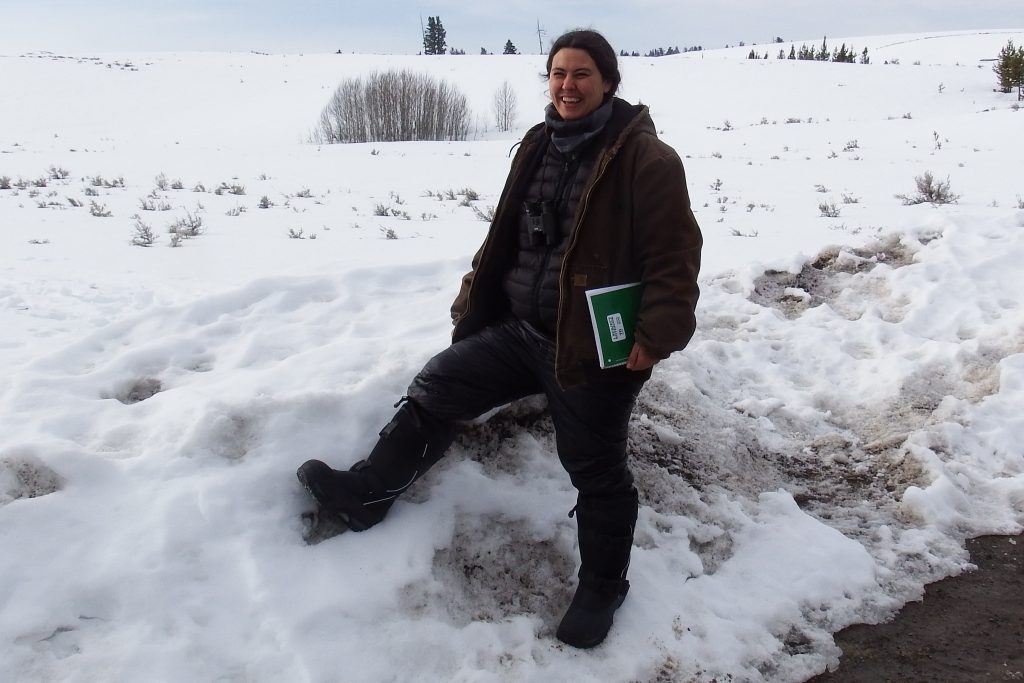 I’ll admit to feeling a bit discouraged at this point. I was overdressed, having packed everything on the recommended list and worn two-thirds of it. Wool socks beneath -100 F boots. Long johns beneath down pants. Six layers on my torso and two on my hands. I was too hot for a hat even though others were stomping their feet at 19 degrees. 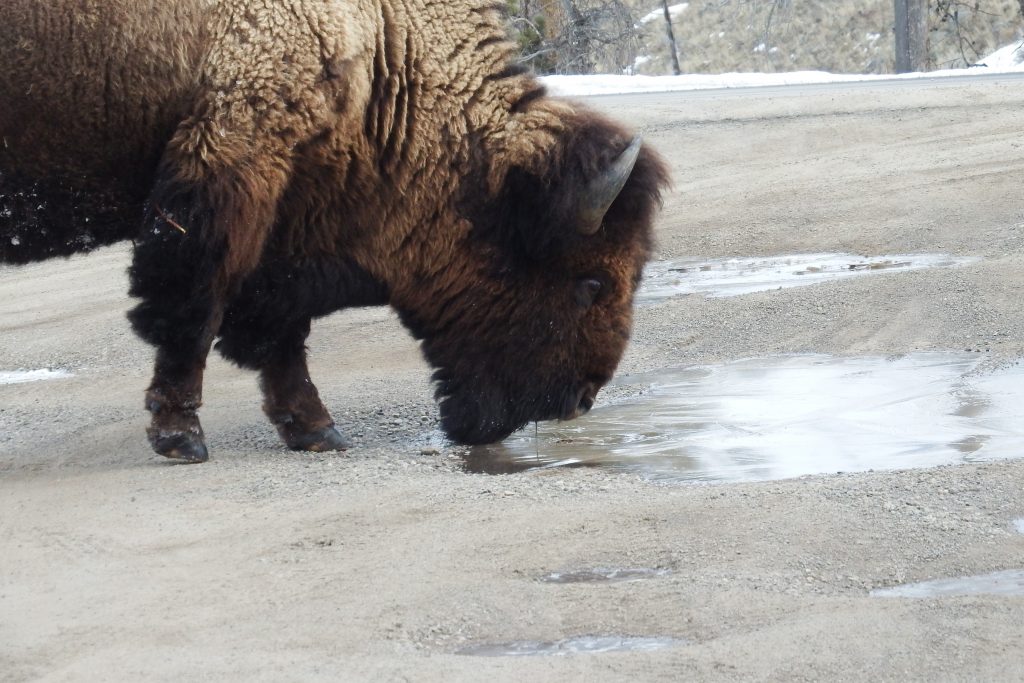 A bison reminded me how good I had it. He took a side trip into a parking area in search of water, breaking through the ice with his nose before drinking long and deep. Afterwards, perhaps spooked by our proximity, he left the pavement and sunk hip deep into the snow, struggling to move either forward or back. 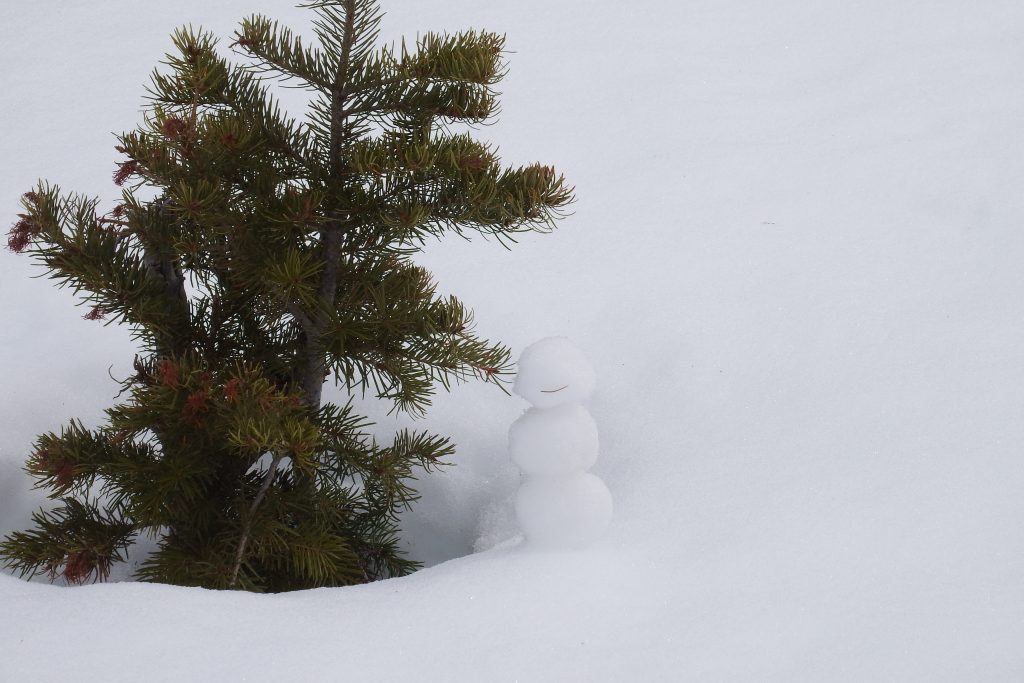 Yes, this is foreshadowing. Pay attention. 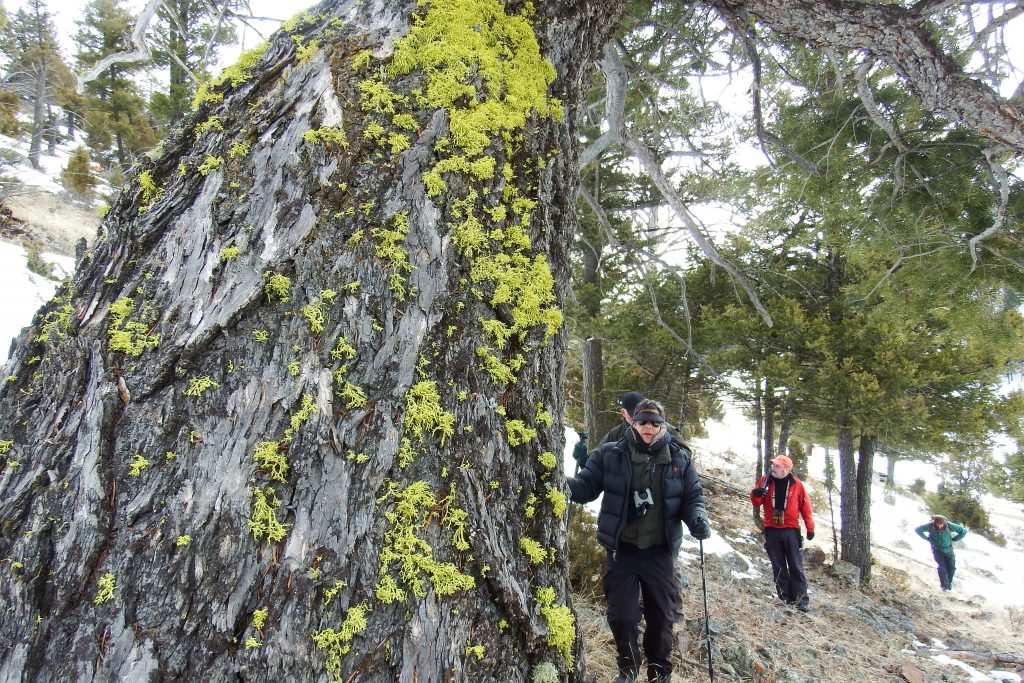 Anyway, back on the trail of the wolf we decided to leave the road and do a little postholing. What’s postholing, you ask? 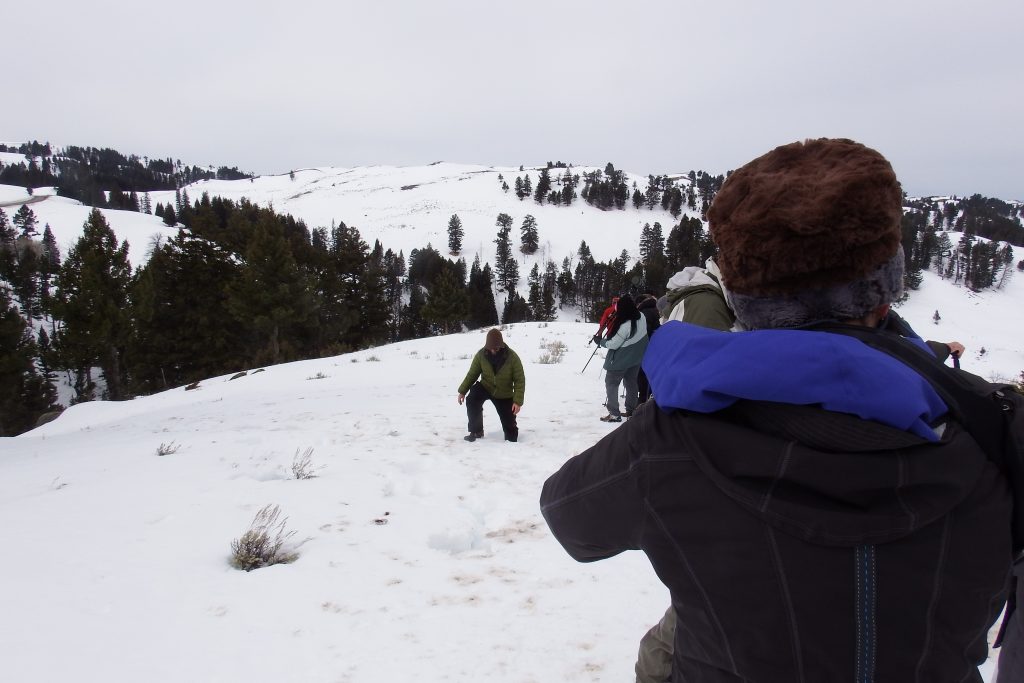 It’s when you walk on a crust of snow that occasionally drops you through into a knee-deep post hole. Then you’re faced with clawing your way out without disrupting the surface so much your other leg breaks through as well.

Suffice it to say, postholing is nothing like ambling down my usual woodland trails! 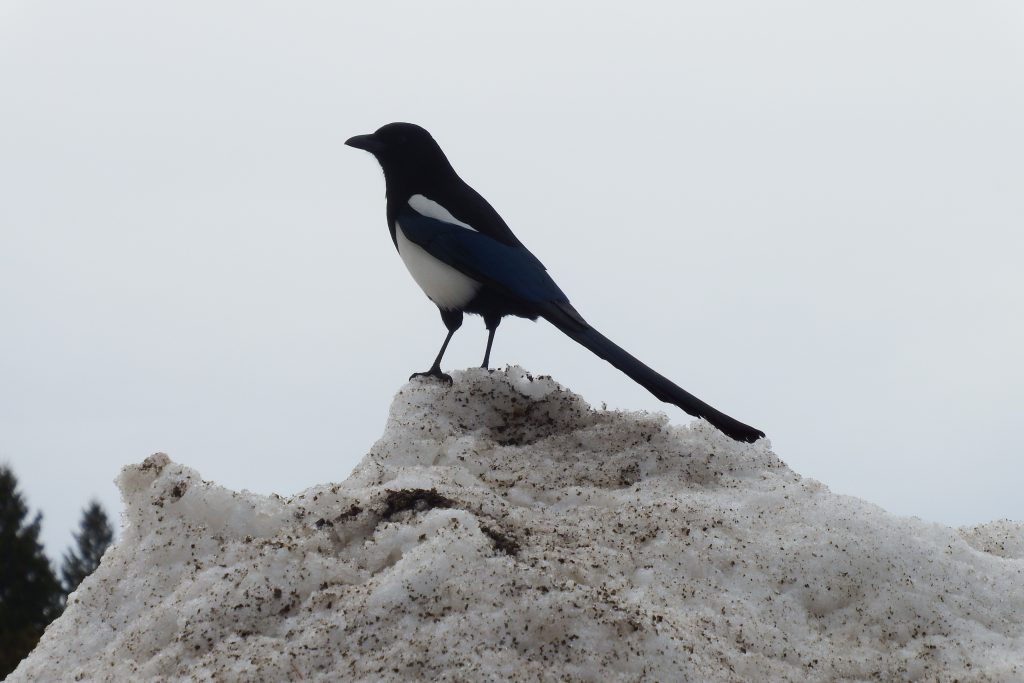 Despite a bit of postholing, I thoroughly enjoyed our off-road excursion…but the wolves still refused to show. So we headed back to Mammoth for a delicious lunch and a bit of bird watching. This magpie is the picture my travel computer feels like posting, but we were also treated to magnificent views of a sleeping male great horned owl and his mate hidden deep in a nest of witch’s broom. 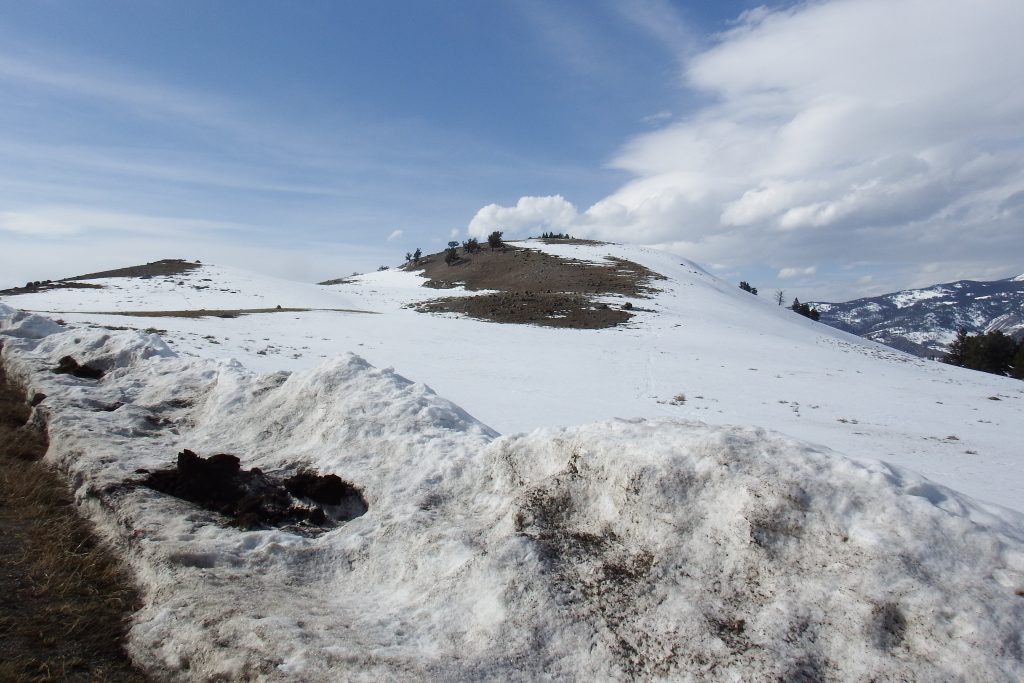 So, yes, there was lots of beauty and wildlife…but I wasn’t the only one who wanted to see wolves. So when our leader came to us with a decision — the 8 Mile Pack was on a kill and we could see it if we walked through a mile of rock and snow — I jumped at the chance to take part.

I was so gung-ho, in fact, that Mary (another wolf watcher) and I set out up the road toward North Butte before our trip leaders had finished handing out scopes and trekking poles. Only after we’d crested the little hill on the left did we look back…and realize the rest of the group was waving at us. We were headed the wrong way.

No problem. We’d cut across the snow to meet them. But the snow was deep — up to our hips in spots. And postholing was happening right and left.

One of my pack mates has a photo I may manage to add later. Taken from a distance, Mary and I are both waving our arms wildly as we attempt not to sink into the snow. But I have one leg submerged and she’s going down to.

Yes, this is why this section of the blog post has no photos. I was far to intent on survival to pull out the camera! 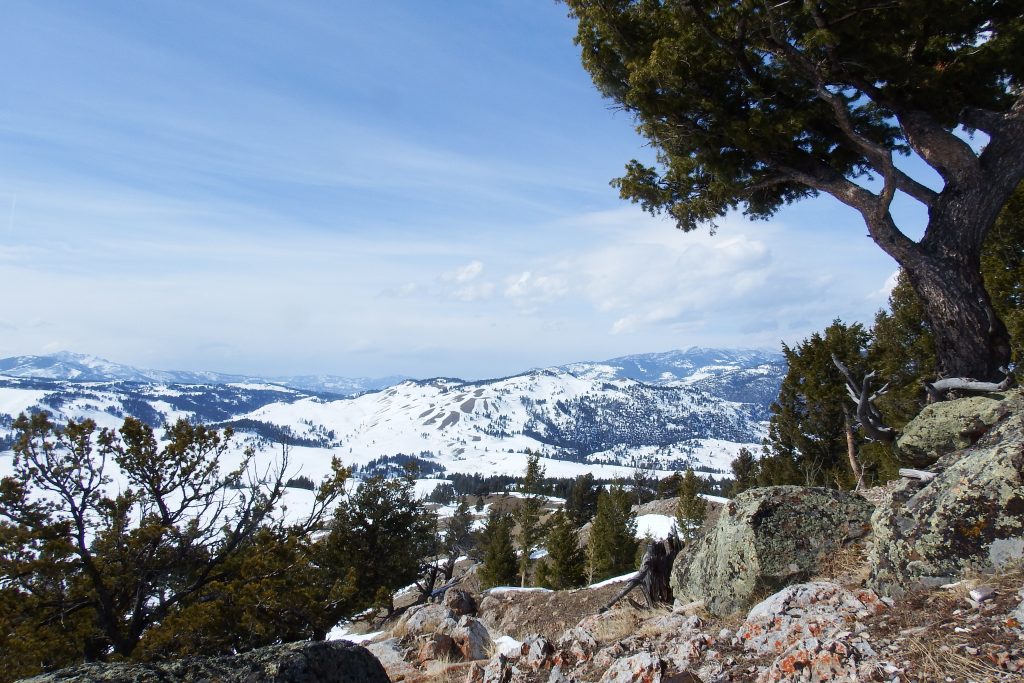 At one point, I tried following a bison trail…but apparently I weigh more than a bison. Still, Mary and I pressed on, not smart enough to take turns breaking trail the way wolves do but instead spreading out in our own separate struggle.

Eventually, huffing and puffing, we caught up to the group and continued climbing up the hill, through thin high elevation air, hoping the wolves weren’t gone. 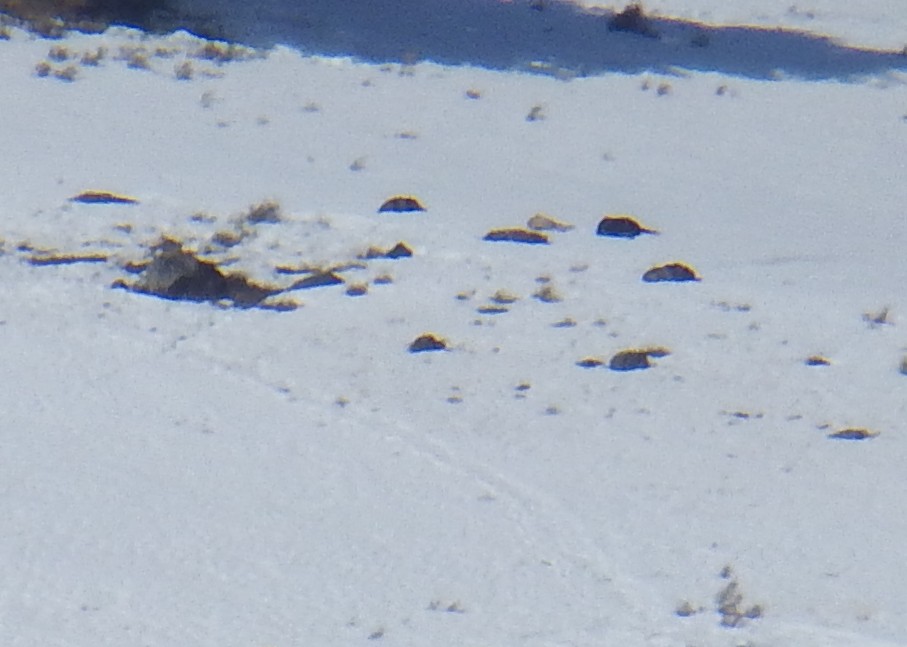 They weren’t! At the top, we set up scopes and found them, four black and two gray wolves lounging three hundred feet or so from the elk carcass they’d gorged upon that morning. Through binoculars, they looked like specks. Through the scopes, they looked like lumps.

Then one raised its head…and imagination filled in the blanks. The wolf was real and wild, seeming to peer across the mile of snowy ground that separated our two packs.

“Follow your alpha next time,” I imagined the wolf admonishing me and Mary. Nodding sagely, I lay back and listened to the wind rushing through the pine trees while soaking up my first wild wolf sighting.

And on the way back, Mary and I let our tour guide break trail.

Wanna chime in? I’d love to hear your comments on facebook: