Did you stumble across this page without reading chapter 1? If so, click here to start at the beginning of Huntress Unleashed. 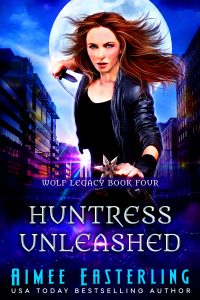 I loaded the last dirty plate into the industrial-strength dishwasher and exhaled for what felt like the first time in five endless days. It was Friday at 4 pm. Dakota’s pack could catch their own dinner tonight—likely on the hoof, with no cleanup required—and leftovers would tide them over for the rest of the weekend. Which meant I could finally head out to my other life, the two days that made my current gig worthwhile.

“Hey, Ember, save me anything?”

Ryder’s shoulders were so wide that he had to turn slightly to pass through the doorway, and his face was scarred and pitted from the hard life of a member of the regional enforcer’s pack. Still, I smiled rather than cringed as he towered above me. This hard-edged shifter was a softy where it counted and he was always appreciative when I saved him a treat.

To that end, I bent to peer behind a stack of mixing bowls in search of the small tupperware container I’d hidden away from the ravening hordes who blew through the door in search of a snack two hours earlier. “Of course I did,” I told him, then waited as he cracked open the plastic lid to reveal the donut therein.

The scent of licorice and sugar made my nose crinkle in protest, but Ryder rolled the same air around in his mouth like a wine connoisseur. “My favorite,” he rumbled, breaking off a tiny piece between thumb and forefinger and nibbling at the tidbit with all the dignity of a debutante.

He was watching his waistline, he’d explained last month. So he preferred to make this one treat last for days rather than sucking it all down at once the way most wolves would have done. Despite everything—my human not-quite-mate three towns over, the perilous secrets I hid behind my easy-going smile, and my deep-seated aversion to the flavor of licorice—Ryder’s obvious appreciation of well-formed baked goods filled me with an abiding sense of satisfaction.

The zing of awareness as my patience paid off, though, was twice as sweet. “You still on the hunt?” Ryder asked after his Adam’s apple bobbed once to mark the passage of donut bite from mouth to rather flat stomach.

“For my brother?” I asked, heart lifting at the thought that Derek had resurfaced at long last. Because my gut told me that Dakota was the key to finding my missing sibling. And even though I was really here as a mole for my father, I kept hoping Derek might pass through the compound if I waited long enough….

But Ryder’s eyes slid sideways rather than meeting mine head on. “Naw,” he elaborated. “I meant—are you still looking for those pills?”

This time, it was my turn to raise my brows even as I breathed out a cautious “Yeah.” Because I could have understood Ryder coming to me with information regarding Derek’s sentencing. But the current change of tune felt like a trick.

After all, when I’d first asked Ryder about the drugs in question, he’d told me “No can do, pup.” The gift of a licorice-studded scone hadn’t softened his initial stance one bit, and I certainly hadn’t blamed him for the refusal. Not when Dakota doled out her pharmaceutical treats with ruthless efficiency, watching as avidly as any ER nurse to make sure the pills went down the gullet rather than being spit back out into waiting hands.

But perhaps there’d been a policy shift in the interim. Or maybe weekly licorice pastries had worked their magic in a cumulative fashion. Either way, I could barely believe my eyes as three white tablets clanked down onto the counter beside me, one nearly rolling away before it landed at last on its flattened side.

I reached out to nab them, but Ryder’s hand settled atop mine. “Careful, pup. This shit can really fuck you up,” he warned.

The haze of licorice and testosterone surrounding the words tickled my nose into a near-sneeze. But I squashed the urge and instead nodded vigorously, hoping a gestured reply would suffice since I wasn’t quite able to untangle my tongue.

Sure enough, acknowledgement was answer enough. Without another word, Dakota’s second-in-command picked back up his precious donut and ambled out of the kitchen, leaving behind contraband that would not only fuck me up but might actually get us both killed.

Good thing I had a tray of cupcakes on hand to cover up objects that shouldn’t have rightfully been in my possession. Poking a finger into the side of one pastry just beneath the line of frosting, I tucked the pills away in the handy hidey-hole then smoothed the icing back into place. Within seconds, the subterfuge was complete.

No one would have guessed that the pastry originally intended for my house mate was now sullied with illegal narcotics. No one except me and—soon, I hoped—my patiently waiting father.