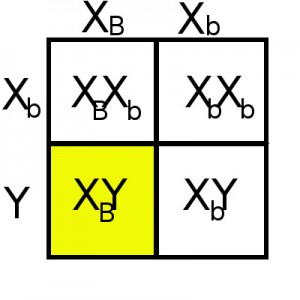 One of my readers ended up scratching his head over werewolf dominance in my Alpha Underground series. And while I don’t want to add an infodump within the book (since, let’s face it, 95% of readers don’t care why Hunter is so dominant as long as he is), I figured I’d share my answer here for anyone who wants to delve in deeper.

The astute reader of Shiftless will recall that werewolfism itself is a dominant, X-linked trait. That’s part of why halfies give the patriarchal culture shivers — a male child of a female halfie has a 50/50 chance of being a normal werewolf…or of being entirely human. Not a good deal if, like Chief Wilder, you were hoping your wife would spit out a male heir who could carry on the family name.

While halfies are relatively easy to understand if you’re fond of punnet squares, the factors that decide a werewolf’s alpha stature aren’t quite so simple. There’s an element of genetics to it, but also a bit of epigenetics and some plain old environmental effects (aka nurture instead of nature). Bloodlings are more likely to be alphas because they spent their childhood in lupine form, and alpha shifters do tend to be more connected to their wolves. Males are more likely to be alphas because testosterone works into the equation, and so does being raised to be bold rather than submissive.

That said, there’s also an element of chance in the equation. You know how some families have a blond mother, father, sister, and brother…then one last kid who’s raven-locked? No, he’s not necessarily the milk man’s son. Genes are complicated things, and sometimes strange combinations or mutations pop up and create the unexpected. 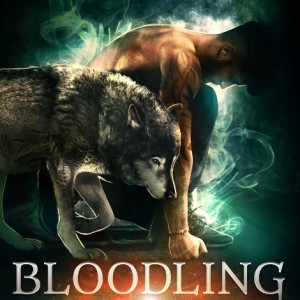 So while my reader thought that the 75%-human heritage of someone like Hunter should water down the bloodling half of his nature and create a more mild form of alpha dominance, you can probably gather by now that the uber-alpha in question is 100% shifter genetically (having inherited the dominant werewolfism gene from his halfie mother — see punnet square above).

But he’s not a plain old werewolf, even by bloodling standards. Instead, hybrid vigor is also coming into play. (If you don’t remember that term from Bio 101, I’ll wait while you look it up.) For an example within my Wolf Rampant world, do you remember that oddly powerful halfie from Feint of Heart (one of the episodes in the Bloodling Serial)? She got dealt some lucky cards in the way her human and werewolf genes aligned, so she ended up more powerful than both parents combined. Not necessarily more dominant…but as Hunter shows, that can happen as well.

And then there’s the semi-magical element that I don’t want to ruin if you haven’t read Alpha Ascendant. Plus the fact that alpha dominance is something you can nurture just like you can rewire your brain with cognitive-behavioral therapy (more relevant to Fen’s own adventures).

But I probably already lost most of you at epigenetics, so I won’t ramble on further. Still, if you were grumping at your kindle and trying to understand why Hunter is an uber-alpha instead of a milksop, perhaps this post will make the complications of werewolf dominance a little more palatable. Thanks for reading!

(Yes, I was a very geeky biology major in college. Why do you ask?)