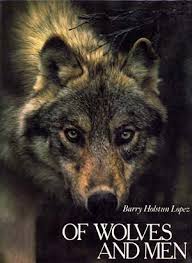 In Of Wolves and Men, Barry Holstum Lopez digs deep into the lives and behavior of real wolves. Then (in my favorite chapter), he turns the tables and considers how humans have merged themselves with canines in the myth of the werewolf.

Actually, as a side note, I was entertained to see many other kinds of shifters well-represented in pre-modern folklore. Bear shifters are currently clogging up the bestseller lists on Amazon, but early Norwegians would accepted werebears as fact. Similarly, werehyenas were considered to be real in Africa, werefoxes were given a wide berth in Japan, werejaguars were alternately worshiped and feared in South America, and werewolves were both dreamed about and persecuted throughout Europe.

So what does it take to turn into a werewolf? European legend says you can don a wolf’s skin, swim across a specific body of water, drink from liquid pooled in a werewolf’s footprint, munch on special roots or apply special ointments, drink from magical streams, or wear a lucky charm. Take your pick! Interestingly, though, the author didn’t once mention the modern mainstay — being bitten by a similarly afflicted wolf/human hybrid.

Some werewolves were shapeshifters for life, but others only took on fur for a few days or years at a time. The shifters might be sorcerers who chose their fate, cursed victims of another sorcerer, or (less often during and after the Inquisition) a benevolent being out to do good. Alternatively, you might be a werewolf simply because you were born on Christmas eve, because you came out of your mother feet first, or because you were the seventh daughter (or son) born with no sons (or daughters) in between.

And that’s just in Europe. The Navajo belief in skinwalkers follows a different track entirely.

But I’ve rattled on for long enough. Time to go back to my own werewolf world where dual-nature beings are born and not made. Because, after all, it’s more fun to make things up than to stick to the rules.