Are you ready for a sneak peak into Moon Dancer? This book probably won’t make any sense if you haven’t read Wolf Dreams. But if you’ve got book one under your belt, here’s a teaser to whet your appetite for book two. 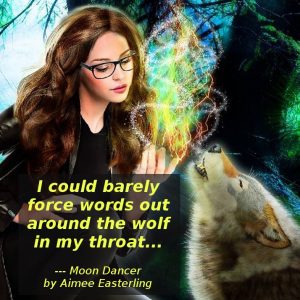 It came as a dream but felt like a vision. A wolf’s face in beaten copper, hollows where the eyes should have been. The hand I possessed—broad, ornamented with a ring of twisted fibers—slid the wolf mask into a tightly woven basket that bobbed along the edge of a barely illuminated stream.

“…The old ways.” A male voice rumbled out of my chest. Quiet drumbeats almost drowned out our words.

Something clenched inside me. My wolf, sleeping until then, woke and clawed at my insides.

This was no time for lupine nonsense. I pushed the wolf down, analyzing the artifact that was being released into an underground watercourse.

It was ancient. Even in the dim light, I could tell the mask had a story and belonged in a museum. Was it…?

Before I could fully formulate the question, the artifact was lost into the wild. Like a stick dropped into a stream to race against another, the basket leapt free of our fingers and jumped forward out of reach.

We didn’t try to stop it. Instead, we stood frozen while the roar of a not-so-distant waterfall was overwhelmed by a rising melody of chants and drumbeats. Weariness of age made our body tremble as the last flicker of copper disappeared into the darkness.

“Come,” the man murmured. His voice was querulous. “We need you.”

For one moment longer, we lingered. I couldn’t tell why the man whose body I inhabited wasn’t moving or who he’d been calling, but I understood my own intentions.

It had been months since I’d visited the past in a vision. No wonder I reveled in the connection. What was this man about to reveal to me? What would…?

We turned. Hit pause on a cell phone. The soundtrack halted mid-note.

This wasn’t the prehistoric past. This was the technologically overpowering present.

I woke to the blaring anger of a long-ignored alarm.