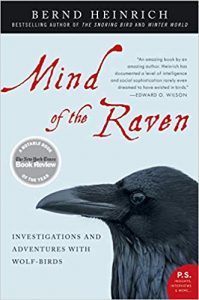 Did you enjoy Olivia’s pet raven in Wolf Dreams? Adena was originally meant to be a crow, but my husband talked me into turning her into a raven as a tribute to my Poe-loving father. Then, after writing the book, I discovered that wolves and ravens have an important relationship that likely goes back thousands of years.

In The Mind of the Raven, animal behaviorist Berndt Heinrich traveled to Yellowstone National Park just like I did but with a different goal — to figure out why wolves and ravens are so often found together in the wild. What he discovered appears to be a true symbiosis, with both species coming out ahead.

Ravens have the more obvious benefit, counting on wolves to break through tough hides so they can get to the good parts of carcasses. The birds also seem to crave the protection of a big burly wolf to make sure a passing predator won’t snap them up while they dine. No wonder ravens often show up soon after a wolf howls and hang out with wolves even while they play and rest.

On the wolf side of the coin, high-flying ravens can be handy at finding weak animals that will be easy to slaughter. In his book Brother Wolf, Jim Brandenburg tells about ravens finding a dead bear (beaucoup meat, impossible for them to access) then yelling until wolves arrived to tear the hide open. Ravens also act as sentries at carcass sites, noticing interlopers and waking wolves from their naps to chase competitors away.

“I can sneak up on a wolf,” a filmmaker told Heinrich, “but never on a raven. They are unbelievably alert.”

In fact, some scientists think that wolves and ravens consider each other family. When wolf pups are smaller than ravens, their parents don’t mind big black birds hanging around the den site and tugging on the youngsters’ tails even though they’d quickly drive any other animal away.

Perhaps that’s why I subconsciously chose a raven as Olivia’s first pack mate?