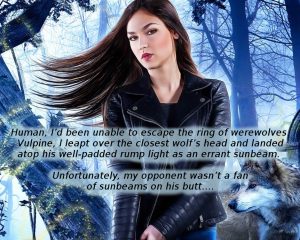 I realized I hadn’t posted here in nearly two months — oops! In my defense, I’ve had my head down following Mai through the winding path of book two in the Moon Marked series. And now Shadow Wolf is finally ready for your eyes. If you missed book one, I highly recommend you start with Wolf’s Bane instead. Otherwise…enjoy!

Dried blood coated my cuticles and I blinked, unable to make sense of the unexpected sight. Safely sheltered by werewolves, I’d gone on frequent fur-form expeditions in recent weeks. So maybe that explained the dark circles beneath my fingernails…but since when did I pounce upon unwary rabbits and rip open their throats while I was sleeping?

Seeking clues, I tipped my head upwards to take in the crescent moon then stamped bare feet against bent and splintered grass blades. The strands caught against my toes, clinging as if coated with glue…or with some other halfway-dried and considerably less savory substance.

I leapt sideways, the harsh tang of copper following me away from the trampled circle of earth. From the amount of bodily fluids I’d brought along with me, I could only assume I’d waded through the same carcass that had sullied the grass and soil…or had been the one to spill those bodily fluids myself.

There has to be a rational explanation for all of this. Closing my gaping mouth and forcing air to flow more naturally through flaring nostrils, I peered out at the darkened landscape in which I found myself. I was perched atop a rounded knoll, encircled on four sides by tree silhouettes while the moon shone down through a gap in the canopy to illuminate the spot where I now stood…

…Where I stood beside a cloaked figure all too familiar despite the three months since I’d seen him or her last. The being had bought Mama’s star ball and absconded with it last spring despite all of my efforts to reclaim the magic….

So I was dreaming. I exhaled in relief, pinching my forearm. Unfortunately, the sharp burst of pain failed to wake me back up.

Well, if I had to repeat a three-month-old battle against the owner of my mother’s star ball, perhaps this time I’d win the fight. Change the rules, change the game….

To that end, I yanked at the source of my magic, the glow of a sword arcing through the air between me and my enemy. And in instant response, lightning bugs rose in a wave of green-hued reaction, their sheer numbers proving that this was not memory but rather dream. I’d never known so many of the bioluminescent fliers to exist in one location…had rarely even seen a smattering of their neon lights at the wooded edge of the city park where I sometimes went to be alone.

But I wasn’t located in my home city any longer. Instead, forest stretched out around me, lacking streetlights, porch lights, even the barest hint of asphalt and diesel fumes to pinpoint a nearby road.

Where was I? And why had I moved this frequently remembered battle from the abandoned theater in which it had actually occurred to an idyllic spot lifted from a fairy tale?

All of these thoughts flooded my neurons in the time it took for the lightning bugs to wink out and return the scene to near darkness. Meanwhile, as if my enemy had been waiting for the return of my attention, cloaked arms rose in a flicker of black on black. Then a shining orb levitated out of the being’s right sleeve.

Now I could see my opponent easily as he—she?—beckoned me forward with one curving finger. Come, the gesture demanded as Mama’s star ball winked at me from around the being’s gloved hand. I cocked my head in response to the magic’s odd behavior. Then the glowing star ball shifted, stretched…and turned into a whip that lashed out faster than a cobra to encircle my arms and chest.

The magic burned. Cut through my silk kimono and almost—but not quite—prevented me from noticing how dramatically this nightmare had gone off the rails of its usual script.

“Who are you?” I demanded, not even trying to bring up my magical sword to sever the imprisoning connection that pulled me one step closer to my nemesis, then another. Because I could feel my mother’s essence within the glowing rope restraining me—who knew what would happen if I cut that soul-bound magic in half to free myself?

The words had been a parry, meant only to win me another moment in which to think. But, to my surprise, my opponent didn’t ignore them. Instead, lasso pressure on my stomach eased as a hooded head cocked to one side in mimicry of my own earlier gesture. I could almost smell the being’s confusion as he or she paused rather than continuing to reel me in.

Scent. Yes, of course I should use every weapon at my disposal if this really was a face-to-face meeting with my nemesis rather than a rehashed memory-turned-nightmare.

But the breeze was flowing from behind me, the air too dry to be redolent with identifying scents. And as the wind whipped unbound hair against my cheekbones, I flinched, realizing what I should have gathered from the start.

The body I inhabited wasn’t my own—how could I have missed that? Instead, I stood in the skin of my dead mother. More slender than my real body, a trifle shorter, and enfolded in the subtle haze of jasmine that always preceded my mother whenever she entered a room.

But before Mama could bow to the Master further, before I could beg forgiveness for letting her fall into such a trap, my earlier wish was granted. I slipped out of my mother’s body and woke in my own bed with a start.

Keep reading chapter two on my blog. Or dive straight into the full book on the retailer of your choice.