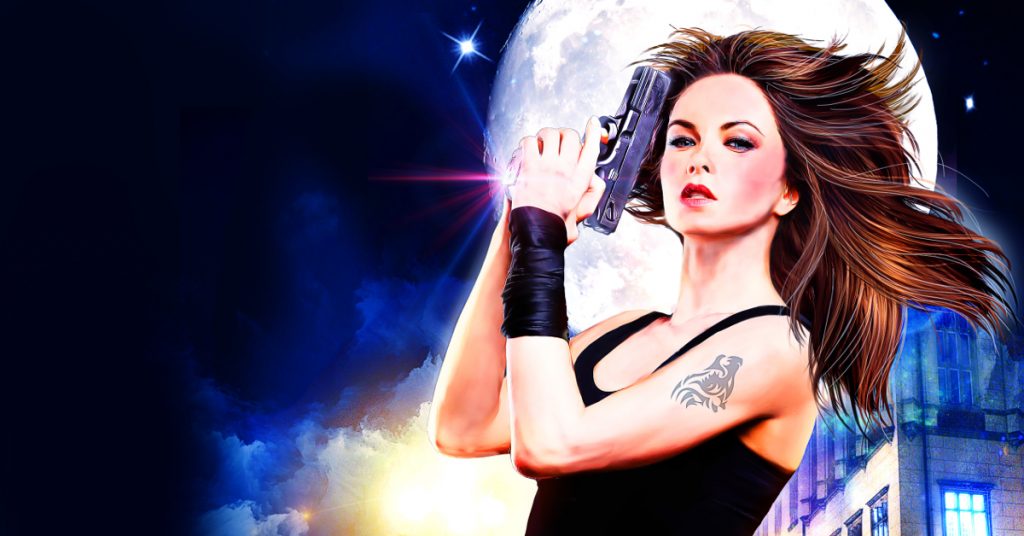 If you’ve been reading along with Ember’s adventures, I hope you’re as excited as I am to see what she gets up to in book three. But if you’re new, these chapters will definitely contain spoilers. So you’ll want to start your adventure with Huntress Born. Enjoy!

Shifter teeth, human blood, glints of ivory against ravaged skin. I woke, gasping against the restraints that snugged limbs tight against my body, only to find my lupine form swaddled by ungainly human clothing. The pants and shirt had fit perfectly when I first fell asleep and would again as soon as I….

My mate’s voice cut through the haze of returning reality, his deep tones underlain by the sweet scents of chocolate cake donuts combined with his personal bouquet of books, sandalwood, and wolfless man. Blinking watery eyes against the soft light of evening, I wriggled out of no-longer-useful clothing and came erect on all four paws in the passenger seat of my deceased cousin’s SUV.

Before us, three cops walked down a line of stopped vehicles toward us. A tough-looking woman, a guy so skinny he verged on emaciated, and the stereotypical donut eater. They didn’t look particularly menacing, but….

“Wolves or humans?” Sebastien asked, his voice filling with grim urgency. And despite the necessity to focus on current danger, the question sent me spinning backwards into a memory so vivid it might as well have been a continuation of my recent dream.

Blood sprayed across my body like the fine mist from a malfunctioning juicer, my cousin’s form disappearing within a maelstrom of spinning stones and chunks of ripped-apart asphalt. Sebastien slammed me into the ground to protect my fragile body. But my companion couldn’t block the sight of an exploding bomb taking out both a government compound and a family member I’d known for my entire life.

Meanwhile, on the other side of a thin line of night-darkened trees, Dakota’s pack howled a promise that no innocent bystanders would survive the ordeal. None except me and my not-quite-mate….

Not that Sebastien and I had been entirely innocent by the time we fled the scene of the crime. We’d slain four werewolves during the course of our own escape, and now both angry government agents and surly shifters were hot on our trail.

These advancing officers could be either or neither, another danger to overcome or merely one final roadblock on our path to a safe spot to spend the night. It was impossible to tell which while the SUV’s encircling metal cut off all outside air….

I whined and pawed at the side window, hoping Sebastien would understand my wordless plea. All day long I’d dodged his questions, this most recent descent into lupine form a symptom of my subconscious desire to shut out the relentless, if polite, interrogation that had flowed from the professor’s lips for hours on end. Going to sleep then donning fur had solved that problem at last. But now my lupine form meant I couldn’t communicate using much-needed human words. All I had was wolf skin and wide eyes that failed to convey the intensity of my distress.

Only, the fickle bond that had proven no more than a liability for most of the preceding day must have clicked into gear while I slept. Because glass slid down without the necessity of words and air whooshed in to fill the space around me. I inhaled deeply then sighed out my relief. Humans. Dakota’s lackeys hadn’t found us quite yet.

Unfortunately, my relief was short-lived. Even though no werewolves waited in the wings, these cops each wielded a hand-held computer into which they were keying other drivers’ identifying information. Unconsciously, my ears pinned back while a whimper emerged from my furry throat.

If given a choice between SHRITA and shifters, I have to admit that I would have chosen the wolves. Because government agents were remarkably effective despite lacking claws and fangs. They’d kidnapped my mate yesterday, had been implicated in the disappearance of my brother weeks before that, and might even now be hunting Sebastien if anyone managed to survive last night’s bloodbath.

I tried sending that knowledge down the tether that tied me and Sebastien together. Tried…and failed as the phantom thread slipped away from my searching muzzle and disappeared into the void that kept us resolutely apart.

Sebastien might have been able to guess that I wanted the window rolled down seconds earlier, but he wasn’t receiving my far more important transmission now. And how could I expect him to when our mate bond hung as loosey-goosey between us as a pan of uncooked custard?

Or maybe you’d like to help out by spreading the word on Facebook? Thanks in advance for your vote of confidence!