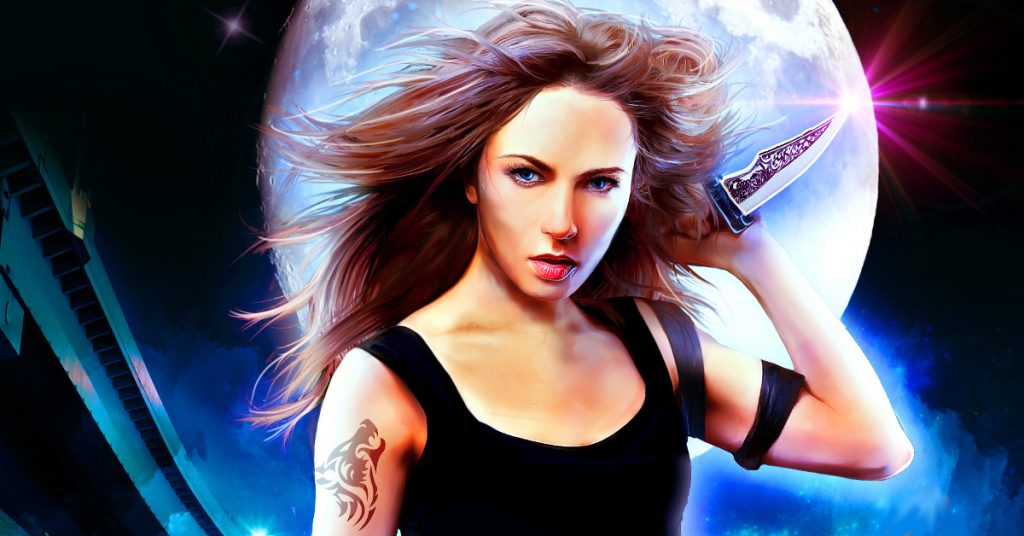 If you’re just tuning in, this excerpt will probably make more sense if you start at the beginning….

I should have realized that my wolf hadn’t surrendered to my earlier admonitions. She was merely biding her time and waiting for the right moment in which to strike.

Now, as exhaustion rounded my shoulders while the lack of nearby family gnawed at my gut, my inner beast grabbed the reins out of my tired fingers. Pushing open the bedroom door with human hands, she drew us toward what she considered the solution to all of our problems—a session of snuggling with our recently bonded mate.

And I’ll admit it—I didn’t really resist. After all, the day felt like it had lasted for an eternity, and the steady susurrus of Sebastien’s breathing drew us forward like flames entice a moth. So my wolf and I were united as we passed through the dimly lit corridor, pausing only after we were able to peer greedily upon our mate’s enticing body.

He was asleep. Sacked out on the sofa with one arm wrapped around a cushion and the opposite leg visible atop the thin blanket that he’d fallen asleep beneath. Resting, the professor’s scent was less intense than usual, but also more complex. Old books and brilliant sunshine filled my nostrils, and beneath that came the merest hint of slippery elm.

Then I lost track of rational thought as my own inner beast subsumed me yet deeper beneath her control. Shedding shirt, underwear, and borrowed pants alike, we slipped into our lupine skin as seamlessly as a fish dives beneath the surface of a pond. Mate, the wolf whispered silently inside our combined body, raising her snout to nuzzle at Sebastien’s stubbled cheek. Ours.

The professor sneezed as our eyelashes brushed up against his nostrils. But although he stirred, he didn’t wake. Instead, the human merely pressed his back further up against the sofa cushions as if welcoming us into his personal space.

My wolf needed no further encouragement. Leaping onto the sofa as lightly as any house cat crept onto an off-limits kitchen counter, she settled in beside the slumberer. Then, my own nature squashed beneath her stronger will, we all three fell soundly asleep.

I woke to the distant tolling of a doorbell, and for one split second I forgot where I was. My dreams had been redolent with sensations—scent, sound, and even the heady tingle of hands sliding across naked skin. Claiming moon, my wolf whispered, reminding me that we had, at long last, discovered our mate.

Of course, Sebastien hadn’t yet discovered us back. Still, when I opened my eyes, I granted both woman and wolf time to soak up his tantalizing presence. Surely we possessed enough leeway for such a small indulgence as that.

Together, my inner beast and I basked in Sebastien’s beauty. Dark stubble coated the professor’s jaw, but the shadow only made him appear stronger rather than unkempt. A wisp of sable hair lay across one high cheekbone, and it was all I could do not to stretch out my neck and nose the tendril aside. Meanwhile, twitching orbs beneath his eyelids proved that the professor was still deeply asleep.

Our mate was just as enticing in daylight as he’d been beneath the moon last night. But the color of the pillow was oddly muted while the medley of scents swirling between us threatened to overwhelm my human mind. And, gradually, I remembered succumbing to the unthinkable—cuddling up beside a one-body in the skin of my wolf.

My location, unfortunately, wasn’t the only problem marring the morning’s tranquility. Voices carried in from outside the house, too soft for me to make out individual words but with their inherent tension abundantly clear. Then fists hit the door in a cacophony that was bound to wake my resting bed-mate sooner rather than later. Time was quickly running out.

Sure enough, Sebastien stirred at last, his arm tightening around my middle as he came gradually awake. And I knew even as my mate hugged me that I wouldn’t make it out of the room without being sighted if I remained in lupine form. Which meant it was time to shift.

After all, waking beside an unexpectedly naked woman is better than opening your eyes onto the snarling visage of a wolf…right?

My inner beast didn’t entirely agree. She argued that we wouldn’t snarl. Would instead lick and tease and make nice. Still, she allowed the transformation at last, helping me shed my fur and regain my skin in the end.

Our internal debate had slowed the shift, though. So we had only a split second to spare before Sebastien’s eyelids lifted, his face widening into a sleepy smile that skewered my wolf and me both with its tenderness.

“Ember, sweetheart,” he murmured, his hand rising to trail across my bedhead even as his lips parted to breathe out my name along with an endearment that melted my human side into a sticky pile of saccharine goo.

Luckily for the sake of both of our skins, my wolf was less susceptible to words. Predators outside, she reminded me, forcing us to wriggle out of our mate’s willing arms and rise onto our human feet.

And as we came erect, Sebastien woke more fully as well. I saw the moment his rational brain won out over his instincts. Saw when he took in my completely unclad nature, noted his eyes roaming from my still grubby feet up to my erect nipples before landing on my reddening face.

Our companion liked what he saw—I could smell his simple animal attraction swirling around my own. But, at the same time, he was uneasy about the fact that I’d ended up in his bed uninvited like some sort of stalker girlfriend.

The fact I wasn’t even his girlfriend made the whole thing ten times worse.

“Ember…” my mate began, brow furrowing as his scent turned bitter and harsh. But even in human form, I could make out the sound of footsteps moving around the side of the house, suggesting that Sebastien’s annoyance was the least of our current worries. Any minute now, whoever had been pounding on the front door would break into the back. At which point we’d both be sunk.

Looks like you were right, little brother, I thought. Just because you’re paranoid doesn’t mean they’re not out to get you. I really should have fried that laptop when I had the chance….

Then, turning to my mate, I voiced my subsequent thought aloud. “Do you have any files on your computer that you absolutely can’t live without?”

Wolf-like, Sebastien cocked his head to one side in question. He hadn’t heard the men at the door, didn’t realize that we were already operating on borrowed time. In fact, I got the distinct impression he wasn’t going to let me out of the room without a long-winded conversation neither of us had time for.

So I instead pushed a little compulsion into my words as I commanded: “Tell me.”

“No,” my mate answered, his frown deepening so dramatically that I thought the wrinkles might cut their way into his very bones. “I back up everything onto the cloud….”

Even as he obeyed my request, though, I could see Sebastien’s scientific interest being piqued by my lapse into werewolfism. Further questions would certainly be piling up within my mate’s analytical mind just as they had the day before.

But I didn’t have time to indulge him. Instead, I snagged my discarded clothing then hightailed it back toward the professor’s unoccupied bedroom even as I cast my reply over one naked shoulder.

“Great,” I answered. “In that case, I apologize in advance. Answer the door, delay them as long as possible, and I’ll be back after your visitors have left the premises.”

Want to know what happens to Ember and Sebastien? Keep reading in Huntress Bound!