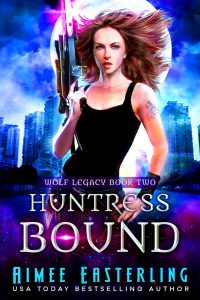 Ready for a peek into Huntress Bound? As a reminder, you’ll enjoy this book much more if you read Huntress Born first. That caveat aside…let’s dive right in!

I stood in Sebastien’s foyer and assessed my current predicament.

Unwitting mate who had no idea I was a werewolf? Check.

Tenuous permission to hunt for my brother within another clan’s territory? Check.

Cupcake from my beloved father to be eaten when I found a safe harbor? Check.

Pants? Okay, so I’d lost that one small item somewhere along the way. But otherwise, I seemed to be all set.

With everything else accounted for, I gazed up into my mate’s molten chocolate eyes and acted more bold than I felt. “Do you think,” I asked a human who I’d only met a few days earlier, “I could spend the night on your sofa?”

Sebastien’s scent gradually shifted as he looked me up and down, gladness at my unexpected arrival giving way to the first inkling of doubt as reality stretched out between us. And I had to admit that he had grounds for misgivings. After all, it was roughly one o’clock in the morning and I’d spent the last hour running through the city in lupine form. So in addition to those missing trousers, my feet were filthy, my hair was tangled, and I looked very much like my inner beast felt—exhilarated, tired, and very much wild.

I’d apparently chosen well, though, when I bound myself to this particular human in a fit of intense desperation earlier in the evening. Because the professor merely nodded and showed me inside, nuking a mug of water plus tea bag in the microwave before joining me on the sofa. Being cared for felt really good…so I squashed my inner chef’s urge to cringe at the irregular brewing method and instead settled in to enjoy the experience.

And, once again, Sebastien proved himself far more insightful than I’d expected. “Tea is healthier when you make it this way,” my companion explained professorially as he handed over the vessel. “More theanine and polyphenol. Try it.”

Obediently, I lifted the mug while struggling against my wolf’s impulse to scoot closer to our host so our skin might touch. The liquid was hot and aromatic, and my inner beast quieted as we discovered that our mate was right. The brew was tasty. Perhaps science won out over tradition after all…at least in this one specific case.

Unfortunately, Sebastien’s methodical mind wasn’t willing to let my unconventional appearance slide by without further comment. “Are you in trouble?” he asked when the silence between us had lengthened considerably. And even though the topic wasn’t one I’d hoped to broach tonight, the gravelly rumble of my companion’s voice was enough to make my inner wolf whimper with delight.

On the other hand, my human self was the one carrying on our end of this particular conversation, and I had no answer to the questions that were surely running through Sebastien’s mind as quickly as possible answers were streaming through mine. Should I explain away my pants-less arrival by saying I’d fallen out of a moving car and torn my clothing on the pavement? Been vomited upon by a drunken party-goer before tossing the sullied fabric? Lost my clothes in an ill-fated poker match? Was there any semi-believable explanation at all other than the fully implausible truth?

“Should I call the police?” Sebastien continued when I failed to so much as nod or shake my head in reply to his earlier question. “If somebody hurt you….”

And there was that wolf-like possessiveness I knew and loved. My mouth quirked up on one side as Sebastien’s aroma shifted yet again, this time turning steely and dangerous in response to thoughts about an imaginary tormentor.

No, Sebastien hadn’t chosen me as his mate when given the chance. Didn’t, in fact, possess a single clue about what a werewolf mate bond consisted of or that he’d become entangled in one against his will. But my companion did worry that I’d been harmed, and that concern soothed my lupine soul.

So I hastened to return the favor. “Nobody hurt me. I promise,” I answered, trying to figure out what else I could tell Sebastien without risking either of our skins. After all, despite being my not-quite-mate, the professor was still a human who wasn’t allowed to learn about shifter-kind under penalty of death. That particular sword of Damocles definitely put a damper on what I was willing and able to share.

I must have hesitated a bit too long. Because before I could come up with any answer at all, Sebastien cut me off. He sighed, pursed his lips, then let me off the hook. “You can’t tell me. I understand.”

He didn’t understand, though. Not really. Our mate bond wasn’t yet fully functional, but proximity still granted me a window into my companion’s thought processes. Via our half-formed tether, I could tell that the professor was confused, puzzled, disappointed…and that he also halfway believed he’d opened up his home to a mafia member whose family would invade with guns blazing before the night was out.

The mere notion startled words from my lips that I wished I could take back as soon as they’d been uttered. “I’m not a gangster,” I told him…only to realize a second too late that an ordinary human wouldn’t have been granted that trickle of insight into her companion’s thoughts.

In an effort to cover my butt, I segued straight into the first semi-believable lie that came to mind. “I wasn’t paying attention earlier, and I got stuck in an auto-locking door,” I started, warming to my tale as it spun out around me. “I would have told you when you first asked, but the result was just plain embarrassing. The door snagged on my pants as I was going out the back of a bar downtown, and I couldn’t figure out how to tear the fabric loose or get anyone’s attention. That place was so loud—it was crazy. So I wriggled my way out of my trousers and came here rather than walking bare-butted through the fray. Really, there’s no reason to call the police. I’m not hurt. I just need a place to stay for the night.”

I paused, then added, “And maybe the loan of a pair of pants.”

For half a second, I thought my mate had bought into my lie. After all, the tale didn’t involve supernatural beings or invisible bonds—surely it was more convincing than the truth?

But then Sebastien shook his head, chocolate eyes hardening into sharp-edged flint. “You can spend the night and borrow some pants,” he offered. “But please don’t lie to me again.”

Read chapter 2 here. Or click here to get your own copy of Huntress Bound.