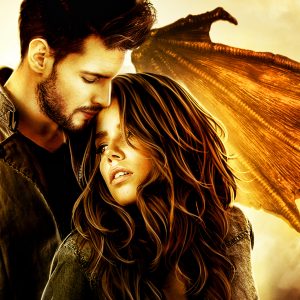 If you missed the beginning of Nicholas’s chapter, please click here to catch up.

She. The word smacked Nicholas across the face just as his brother had intended, and his feet turned toward the stairwell as the fastest path to achieve his destination.

“There’s no big hurry,” Alexander called after his retreating back. “One of the visiting sloggers said she’d been up there for two hours already. He thought the female was one of us. Imagine, a silver dragon and he had no idea she didn’t belong.”

Nicholas could well imagine. Mudsloggers — or sloggers for short — were ordinary humans who occasionally visited the Aerie to trade or work. They were inevitably terrified of dragons, or were at least in awe of the tremendous beasts who prevented the Green from overrunning the few skyscraper safe zones where both dragons and humans lived in harmony. Why should a slogger bother to consider color and gender when the mere presence of a dragon was enough to make most of them piss their pants?

“She shifted?” Nicholas called backwards even as he pulled at his own inner fire and felt fiery wings pop out of human shoulder blades. Stairs were faster than the elevator…especially when you were a dragon and able to fly.

“Nope,” his brother answered, matching him wingbeat for wingbeat. Together, they pushed upwards, navigating the nine stories between kitchen and roof in the time it would have taken for the elevator to ascend a single level.

“She’s leaving then.” Nicholas wasn’t sure why his stomach lurched at the thought. Probably just because he’d never met a female dragon before. Never imagined there were sisters out there to match the brothers — some of his blood, all of his heart — with whom he shared this aerial retreat.

Because there weren’t new dragons being born or made. Every shifter had popped into existence three decades earlier at the same time normal plants morphed into the dangerous Green. Perhaps that was why learning about a female dragon after all this time felt like stepping into a fairy tale where knights and dragons were matched by princesses and tasks of honor.

“Hasn’t even spread her wings,” Alexander countered. Then, catching Nicholas’s arm before the latter could push open the heavy metal door that stood between them and the open summit of the Plaza, his brother admonished, “Slow down. You don’t want to scare her away.”

Nicholas couldn’t slow down, though. Instead, his feet rushed forward, hip thrusting out to press against the release bar in the middle of the door. Sister. The word danced like a newfound secret down his spine and for a moment Nicholas remembered what secrets used to feel like before they’d turned into a burden nearly impossible to bear.

Still, he forced himself to pause after stepping out into the cool, damp tang of evening so his eyes could adjust to the rapidly fading light. Back in the Before, the rooftop would have been ablaze with the glow of electric bulbs, the city beneath so brilliant it made stars in the sky impossible to pick out of the smoggy skyline. Now, the Aerie faded into near darkness as soon as evening fell, only a few beacons of light shining to the north, south, and west where five other buildings rose high enough in the air to provide refuge from the Green.

But Nicholas had no attention to spare for either absent lights or pesky vines that were unable to breach his current elevated location. Instead, his gaze locked onto the beast perched atop the tremendous air-conditioning unit that rose above the roof’s otherwise flat surface.

Silvery hide reflected the last rays of the setting sun and a long tail twined sinuously around the vertical wall below. The strange dragon appeared to be relaxing, basking even. But her eyes were open wide, her muscles tensed as if to flee. And Nicholas found himself motioning his brother backward with a single wave of one desperate hand.

“Go below,” he commanded, knowing even as he spoke that he was screwing up already. Dragons weren’t good at at obeying orders, and Alexander was likely to do the exact opposite when faced with a stark demand.

But…a female dragon. The notion must have filled his brother with every bit as much awe as Nicholas felt, because footsteps obligingly retreated back toward the stairwell from which they’d both come. The door clicked open and clanged shut once more, then Nicholas was alone with the biggest secret he’d uncovered in his entire life.

I hope you enjoyed this sneak peek into Sabrina and Nicholas’s world! If so, keep reading Cerulean Magic here. Or why not join the conversation on facebook?