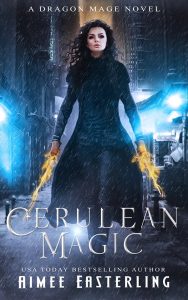 Cerulean Magic is now live! Here’s an excerpt to get you started:

“A moment of your time, Miss Fairweather.”

The familiar male voice chilled Sabrina’s blood, but she continued walking through the shadows of what had once been New York City without flinching. After all, her brother was ambling across the pavement alongside her…and Zach’s tender ears deserved protection.

Sabrina only realized she was humming a quiet defensive melody when air currents began swirling through her numerous ebony braids, clacking the weighted ends together like chattering teeth. In response, Zach glanced sideways in question before craning his head backwards to assess the proximity of the following footsteps.

Then Sabrina lost her breath — and the breeze — all at once as a fast-growing vine took advantage of her brother’s lapse of attention. Wrapping around the teenager’s knee, the ferocious plant jerked Zach down into the bitter ash left behind by burners in preparation for the week’s festivities.

“Watch where you’re walking,” Sabrina said evenly, her stride not even hitching as her sword slashed through succulent vegetation and freed her brother’s leg.

If they’d been traveling through the Green proper, half a dozen additional vines would have joined in the battle. But the combination of recent fire plus late winter chill had beaten back humanity’s enemy this time around. As a result, Zach was able to simply shake off the snake-like assailant and pick up his pace in order to converge upon the sister who had pulled an arm’s length ahead.

In the end, both siblings rounded the corner onto the festival’s main drag together despite the stumble. Unfortunately, their follower hadn’t been shaken off as easily as the near-dormant Green. Thumping boot steps still trailed behind, reminding Sabrina that she needed to find a way to get her absent-minded brother out of the picture before Gleason caught up.

She’d intended to hurry her sibling along until they reached a shop tempting enough to draw him inside, in fact, but Zach slowed as soon as they stepped out onto Central Avenue proper. The sights and sounds of the annual trader’s festival widened the teenager’s eyes, and soon he was spinning in an awestruck circle.

Sabrina couldn’t really blame her kid brother for being amazed either. Brightly powered street lamps were a rarity on the ground where the Green usually sought out every flow of electricity and retaliated by ripping wires to smithereens. And while the scene lacked the bustle of New York City in the Before, there were more humans gathered together in one place than Zach had likely ever seen before in his life.

Temporary booths lined the sidewalks and buskers called from every street corner. Sabrina had attended trader’s festivals many times before, but even she found the colors, sights, and sounds overwhelming.

She only allowed thirty seconds for wide-eyed wonder, though, before grabbing the back of Zach’s shirt and pulling him out of his awestruck daze. Together, they continued walking, ignoring head nods from passing strangers and calls of greeting from across the crowd. After all, Gleason had nearly caught up and Sabrina still hadn’t found a destination sufficiently enticing to draw her brother’s attention away from whatever unpleasantness her pursuer planned to unveil.

The abandoned building they paused in front of probably hadn’t looked like much the day before. Its plate-glass window was still grimy in the upper quadrant where the temporary proprietor hadn’t bothered to scrub away thirty years of accumulated dirt. And steps leading to the front door were split and twisted where tree roots had dug underneath and pushed concrete awry.

But the bottles of every shape, size, and color lined up inside were all her brother noticed. His mouth gaped open ever so slightly and greed filled his youthful face. To a budding scientist like Zach, an apothecary’s shop trumped any more ordinary establishment selling candy, games, or even pets.

“Here,” Sabrina answered the unspoken query, dropping coins from the Before into Zach’s waiting hand. The money wasn’t worth much, but it should be sufficient to buy a little time given her brother’s obsession.

He paused, though, rather than heading directly into the coveted shop. Glancing first at the rapidly approaching figure whose boot steps had slowed only slightly now that his prey had come to a halt, Zach then turned to look once again through the apothecary’s slightly grubby window pane.

Bad blood, but a kind heart, Sabrina thought wryly. The teenager was clearly torn between protecting his big sister and hunting down whatever unpronounceable ingredients he needed to further his experiments. A far cry from the narcissistic Frank Fairweather who had given both siblings their blue eyes and tall builds…along with a shady past that Sabrina hoped her little brother would never learn about.

And was Frank also responsible for that other remnant of the youth’s heritage — an adamant refusal to speak — that hovered like a dark shadow behind Zach’s sky blue eyes? Sabrina didn’t know the provenance of the trauma, and usually she would have tried to tempt the teenager into pushing past the blockage and voicing his question aloud.

She didn’t want her brother to be privy to whatever bile Gleason would soon spew in her direction though. So she let him off the hook. “You don’t have to worry about me, Zach. I’m not a damsel in distress.”

They stood staring into each others’ eyes for one long second — noses at precisely the same elevation and irises precisely the same shade of blue. Then, shrugging, Zach descended back into boyhood. Taking the broken stairs two at a time, he flinched as the bell above the door startled habitual fear back into wary eyes. Then, shaking off the momentary terror as quickly as it had come, he settled down to browse seemingly endless rows of powders and pellets and potions.

It was hell to stand in as parent for a kid whose past left him scarred and broken in ways Sabrina didn’t know how to understand, let alone fix. Hell…but also heaven.

Sighing, she shook off concern for her new-found brother and returned her attention to a man who was not accustomed to being made to wait.