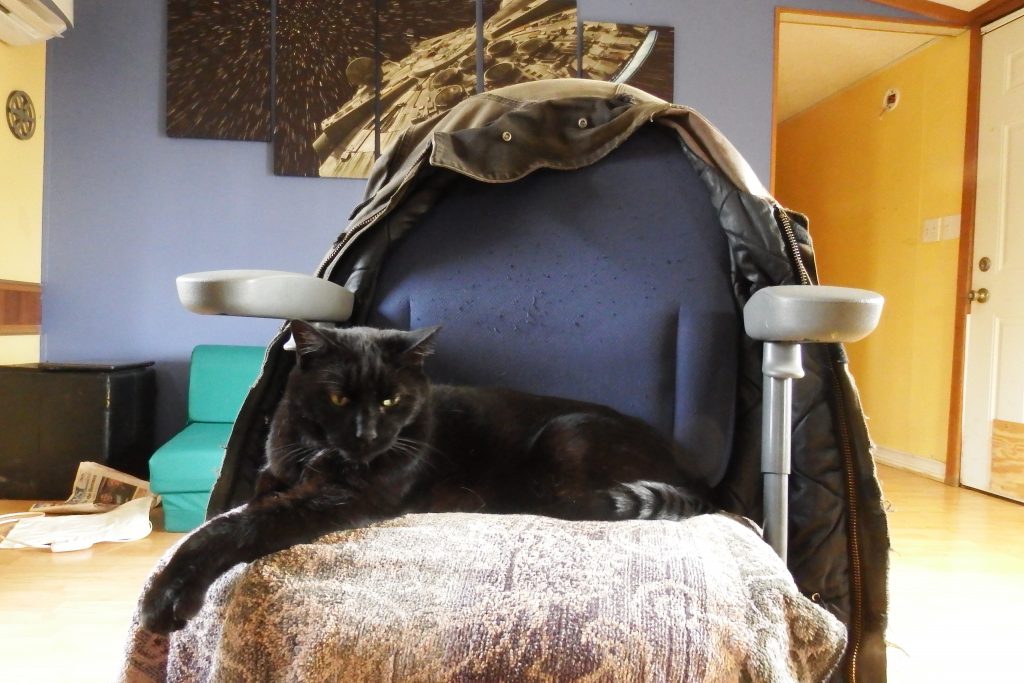 I live in a Star Wars household. Can you tell?

Perhaps that’s why, when I heard about Disney Plus, I decided to indulge in a Star Wars marathon before the new movie comes out.

Never mind that I love to read but almost never make it through a movie or television show.

Okay, so, yes, mind that. For me, a Star Wars marathon involves watching nine movies within a single month. I’m so proud of myself for managing the feat that I couldn’t resist posting a review of each.

(There are no spoilers for Episode 9 below, but if you haven’t seen the older movies you’ll want to watch them before reading this post.) 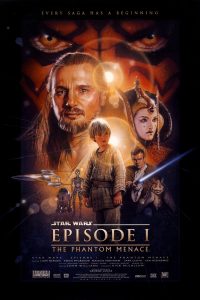 Star Wars Episode 1: The Phantom Menace was absolutely awful. When I watched it in the theater on opening night amid a band of costumed college students, I don’t remember it being so bad. But, I mean, pretty much anything is going to be good in that setting.

Watched at home with my husband (the cat wasn’t invited), Jar Jar Binks was cringeworthy and there was pretty much nothing to make up for his presence. I did enjoy seeing C3PO’s origin, but the whole thing just felt really, really long.

One star out of five. 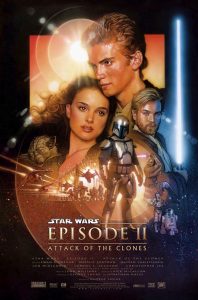 Star Wars Episode 2: Attack of the Clones was my favorite of the prequels. Anakin and Obi-Wan had great buddy chemistry (which continues into episode 3 and is my favorite part of the prequel trilogy). Anakin’s relationship to Padme was thought-provoking, pointing out flaws in the Jedi system of eschewing attachment. And knowing who the villain was from a previous viewing added depth and interest to scenes that dragged for me the first time around.

That said, the movie still felt a bit long. And — my usual annoyance with Star Wars — there was way too much fighting. 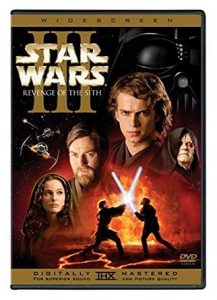 Star Wars Episode 3: Revenge of the Sith started with some great buddy time, but it had two flaws for me. The first is completely a matter of taste (and my husband strenuously disagrees) — it gets too dark for me to enjoy. But even he noticed how Padme — once a strong, interesting character — becomes reduced to a caricature of weakness. (The lack of strong female characters is, in my opinion, the biggest downside of the entire Star Wars saga.) Then there was the endless fighting and gruesomeness at the end, bringing the score to: 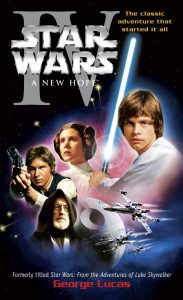 Star Wars Episode 4: A New Hope was a delight even on what I suspect is my third or fourth viewing. (My husband, when asked how many times he’d seen this episode, told me: “I never really got obsessed with it…. Probably only 15 or 20.”) It really benefited from a recent viewing of the prequel, which added depth to a lot of exchanges mentioning the past.

Plus, C3PO and R2D2 have the best banter ever! Luke’s hero’s journey is perfectly executed. Han Solo and Leia and Obi-Wan and Darth Vader are vivid, memorable characters. And the music!

All of that said, I did start getting sleepy in the last third, but I’ll still round its rating up to:

Five stars out of five.

Star Wars Episode 5: The Empire Strikes Back is my very favorite of the first six movies. The romantic tension and banter between Han and Leia is delightful. The drama with Luke and Darth Vader (and Luke’s wrestling with the Dark Side) is gripping. Yoda is perfect.

Since I gave the last movie five stars, this will have to be:

Six stars out of five. 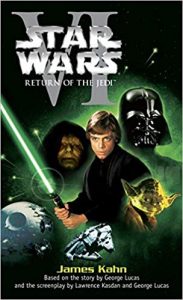 Star Wars Episode 6: Return of the Jedi was a bit disappointing. The first quarter or so was fun (if light-weight), but the middle dragged if you’d seen the prequel trilogy. Suddenly, revelations turned into info dumps. And the final battle between Luke and Darth Vader didn’t have the emotional weight I thought it should have (perhaps because of the photoshopping in of young Anakin to replace old Anakin in the final scene). Unfortunately, my rating became:

(Without the big change at the end and without knowledge from the prequels — in other words, as it was originally screened — this likely would have been four stars for me.) 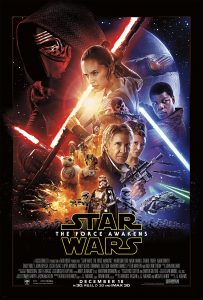 Star Wars Episode 7: The Force Awakens is a tough episode to rate. When I first watched it, the other movies were distant memories from years in the past and I adored it! All of the parts I loved about Star Wars were included with the addition a female character who was less of a sex symbol and more of a heroine than Leia! Everyone who complained about it being too derivative of the original series was clearly wrong.

Then I rewatched the move after zipping through the previous two trilogies over the course of a month…and those poo-pooers were right. The Force Awakens does repeat too many specifics without much tweakage. Even with the awesomeness of Rey and the very interesting father-son story, I reluctantly dropped its score to:

(Although, I have to say, this is perhaps the movie I’m most likely to rewatch. On initial viewing, it was a solid six stars out of five.)

Star Wars Episode 8: The Last Jedi lived up much better to a rewatch. I enjoyed Rey’s thread on the island the most, especially the way the Dark Side becomes very real. There was also a lot of grist for wondering, leaving me hypothesizing about what would happen in episode 9. And the music was utilized just as well as in the original trilogy, managing my moods just the way I wanted them managed.

What did I like less? That endless final battle! I hate to say it, but I felt like every Star Wars movie would have been better if it had been condensed down to an hour and forty-five minutes rather than allowed to sprawl out over two hours and a half. This one particularly felt like it should have been over after the (awesome) confrontation between Rey and Kylo Ren. Plus, I missed the buddy banter that marks my favorite episodes, making this one clock in at: 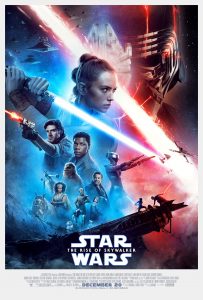 Star Wars Episode 9: The Rise of Skywalker is tough to rate on my first watch. Coming out of a Star Wars movie in the theater, I always feel like I’ve been to another world! Then add on the melancholy of knowing this is the end of a nine-part saga and I’m only vaguely sure I’ll later agree this was: