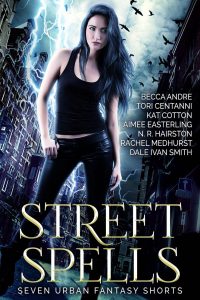 Are you ready for a treat? I got together with six other authors to create a free anthology, full of werewolves and witches and necromancers and goblins. My inclusion slides into the middle of the Wolf Rampant Trilogy (but contains no spoilers, so you can safely read it whenever), answering that burning question — what happened to Chase? Here’s an excerpt from the beginning to whet your appetite:

Sixteen years ago, I met a werewolf. Maybe? It’s hard to be sure when the memories are as fuzzy as seven-day mold grown on a nutrient-enhanced petri dish. Here’s what I recall:

The strip club. Bare skin sliding across cool metal while I ran chemistry formulas through my head to make sure I had them right. I was cramming for an organic-chemistry final the next morning—that part’s a fact—and for one night I cared more about my actual grade rather than about making the bucks that allowed me to stay in school.

Still, there was no pause button to let me study in peace. Instead, it was all pounding music and strobing lights, greedy eyes, a ten-dollar bill slipped into my g-string. I was used to the sensory overload, so that couldn’t be why the night turned into such a fairy-tale in my memory.

The crazy part began when I left work, waved goodbye to fellow dancers before slipping out into the darkened alley that should have been empty…but wasn’t. A male figure leaned against the grimy concrete. Straightened as I approached. Reached toward me with fingers silhouetted against the dim street lamp.

I clutched my mace canister, wishing I’d been smart enough to wait an extra hour to walk to the bus stop with Cindy—Chloe? Callie? If I can’t even remember my closest co-worker’s name, how can I believe this memory isn’t fiction but rather fact?

The man’s words were lost to the adrenaline-fueled terror of the moment. But his hand print…I can still feel it around my bicep, can easily visualize the four pulsing finger marks that lingered there for days after the fact.

My assailant’s breath stank of whiskey, the cheap kind that still cost enough to break the bank in a strip club. His intentions were clear.

I froze. This part embarrasses me, makes the adult I am now wince for the nineteen-year-old I was then. A man grabs you in a back alley and you just stand there? Really, Sienna? You can’t just let the world do what it wants with you. Nobody’s going to save you except yourself.

Only, that part’s not true. The wolf barreled into us out of nowhere, a blue-eyed beauty with teeth so sharp they grazed my skin even as the animal pushed my attacker down onto the asphalt.

A dog, I know you’re thinking. Some policeman’s trained attack beast. Big and gray, looked like a wolf in a dark alley when you were scared out of your wits. It’s an easy mistake to make.

It wasn’t a dog though. Later, after I earned my bachelors and moved on to graduate study, I learned to tell the difference. Tail held straight behind rather than curving erect. Densely furred ears. Eyes—okay, that part doesn’t make sense. But you’ve got to go with me here. I knew the beast between us was a wolf even as my attacker screamed, scrambled backwards, ran from that alley like the fires of hell were on his tail.

I expected the wolf to pursue him. I mean, if I was going to be rescued by the big bad wolf, it should finish the job, right? I hugged my red hoodie closer in to my stomach, stood there with a throat so dry I couldn’t force out a single sound.

And that’s when the memory goes cockeyed. I’m a scientist, I want you to remember that. Was already learning to observe objectively even during my sophomore year of college. I knew how to draft a hypothesis, to test that question with a well-managed experiment, then to accept the results I saw with my own eyes.

This is what I saw with my own eyes. Fur receding into naked smoothness. A body elongating, straightening. White-moon buttocks flashing me as a broad-shouldered man lurched erect.

Or, not a man, but a teenager like me. A few years younger, if I had to guess. I even knew his name.

Chase was one of those club-goers you could tell had shown up on a dare. His cheeks were beet red when he first entered my place of employment two weeks earlier and his eyes kept skittering off the endless array of bare flesh in the room. He remained innocent, too, while returning night after night. He listened as I talked about my classes, asked if he could walk me home.

Chase wanted to be my boyfriend, but I couldn’t accept the kid’s infatuation at face value. I wasn’t stupid enough to confuse lust with love.

Now, though, common sense fled along with the air in my lungs as a wolf turned into a grass-fed farm boy in front of my eyes. “You…it…what?” Or at least, I think my reaction went something like that.

“Angel,” my rescuer started, reaching out to take one of my shaking hands in two of his. Irrationally, the skin-on-skin contact calmed me, never mind that the boy entwining his fingers with mine was buck naked, his family jewels brushing against the leg of my jogging pants.

Maybe that’s why I told him my real name. “Sienna. It’s Sienna.”

The smile on his face was as warm as the rising midwinter sun. And maybe that explains the confusion of my memory. Maybe I was the one dealing with a teenage infatuation sixteen years earlier. That could explain why the entire episode—getting jumped in a dark alley, being rescued by some kind of weirdo nudist—feels as warm and fuzzy as a napping kitten in my adult mind.

“Sienna.” My name on his tongue drew me in closer until I was pressed up against his naked chest. Meanwhile, Chase’s ensuing words made even less sense than my own actions had. “My pack is leaving. I want you to come with us. I know all this—” he motioned at his bare skin “—is strange. But I promise we can make it work.”

And here’s the deal. I was nineteen with no family to speak of, my after-hours job eating up whatever social time I would otherwise have enjoyed. I was tempted. The whole wolf thing…maybe I’d accidentally imbibed something I shouldn’t have earlier in the evening, never mind my rule to never drink from an open bottle while at work. Chase was a white knight, wanting to sweep me off my feet and carry me off into the sunset. For half a second, I wanted to be swept.

But there was that pesky orgo final the following morning. My future boldly charted out before me. A good job, independence, making my own way in the world.

I only realized Chase’s arms had come up to surround me when I tried to push myself backwards and found myself unable to push. For a split second, terror swamped me. You don’t hug naked strangers in dark alleys, I berated myself. How can I remember that mental rebuke so clearly and have gotten everything else so dramatically wrong?

Whatever the meaning of this strangely clear memory, I know this part for a fact. Chase released me the instant my heart rate spiked into terror. Took one long step backwards, his neck bowing even as his heel scuffed against the pavement. “I thought you might feel that way,” he said, not even waiting for me to reject him verbally. “But if you change your mind, email. Please.”

The lined notebook paper he held out between us was folded and burr-edged, as if Chase had spent hours worrying it between finger and thumb. Maybe he’d carried it with him all week as we spoke in stolen moments during my various shifts. Had been itching to hand over his contact information every time I’d sunk down at his table for a break, sipping a cherry coke and chatting about our respective days.

I wouldn’t have accepted the paper then, but I did now. Still, almost as soon as the information was in my possession, I stepped backwards, an apology I didn’t really understand tumbling off my lips. “I’m sorry. But I can’t go with you.”

After all, I refused to be like my mother. Wouldn’t depend on a man then end up poverty-stricken, a single mother who succumbs to a heart attack while far too young.

Wolf boy smiled at me sadly, and for half a second I doubted my own stiff-spined resolve. I ached to change my mind and run away with this white knight, especially when the May evening hugged me gently, promising that fairy tales just might be real.

But if this was a fairy tale, then I’d create my own happy ending. So I turned on my heel and walked away into the night.