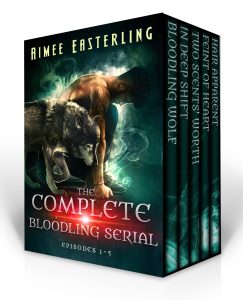 Before reading this final excerpt from Bloodling Wolf, make sure you’re caught up from scene three!

“A leash?” my blood brother laughed, yanking my head around to face him. “Really?”

I could have kicked myself for not remembering the stupid restraint earlier, but Chase had been kind enough to put a lot of thought into the contraption, so I wasn’t as snagged as Justin thought I was. All it took was a simple twist of my head followed by one sharp yank, and then the velcro my milk brother had sewn into the collar parted to leave me scot-free.

My human brain would have rubbed my easy escape into Justin’s face with some witty repartee, but my wolf brain thought it was amusing to simply roll over and scrape my back along the carpet as if I needed to get rid of an ornery itch. Of course, it didn’t hurt that the playful move made it clear I wasn’t afraid of my brother’s teeth one bit.

“Stupid wolf,” Justin muttered, then added, more loudly, “Will you pay attention? You don’t even need to shift—I’ll talk and you listen.” I yawned, but sat up, curious what my blood brother thought I’d want to hear.

As I waited, Justin began to pace back and forth across the sitting room, wasting energy that a smarter wolf would have put into the hunt. My own lupine half understood that my brother was definitely hunting something, and we pitied the poor shifter for being unable to turn on his wolf brain while in human form to make the chase go more smoothly. Instead, Justin ended up wasting energy with erratic two-legger emotions, energy that could have been used to tunnel directly toward his goal.

Eventually, as my blood brother’s silence continued, boredom overcame me. I dropped down into a lounge and had just begun to doze off when Justin’s words returned me to his presence. Too bad—naps were one of the best things about wolf brain. I lolled my tongue out of my mouth in amusement at the thought…and at the look on my blood brother’s face when he realized that, far from being intimidated by his pacing, I had instead taken the opportunity to catch up on my z’s.

“I said,” my brother continued, “that this village isn’t big enough for both of us.” If I’d been human, I would have rolled my eyes. Really? This was the best my big brother could come up with after several minutes of deep thought? The teenager needed to work on his elocution skills. Of course, I wasn’t one to talk since I spent 99% of my time in wolf form and mostly got by on head shakes and tail wags, but I also wasn’t trying to pretend I was some movie sharpshooter, now was I?

“We all know I’m going to be the next alpha,” Justin continued, blissfully unaware of my snarky internal dialogue. “And your posturing is going to get someone hurt.” Someone? The dunce in front of me was the only one in any danger, the way I figured it. Although I might just die of boredom if I was forced to listen to Justin’s monologue much longer.

My blood brother glared straight into my eyes and I matched him stare for stare. “You’re old enough to start your Running Around time early,” the older shifter growled at last, struggling not to look away as my own piercing gaze trumped his. “Take my advice and go find a mate somewhere else,” he muttered, his voice getting quieter under my steady gaze, but remaining adamant. “This pack isn’t safe for you,” he concluded.

I only realized the words were a threat when Justin turned on his heel and left the room, just as our father opened the opposite door to herd me into his study. Oh goody, time for round two.

To continue reading about Wolfie’s future, buy The Complete Blooding Serial. It has the rest of Bloodling Wolf in it, as well as Episodes 2-5.

Find out why readers are saying it’s a “world that could never be boring with old traditions, hysterical festivals, twisting gender roles and power that you can feel emanating from the pages.” Thanks for reading!