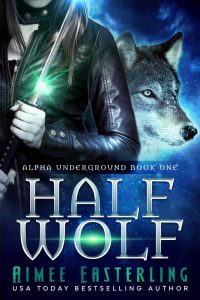 Ready to dive into the Alpha Underground Trilogy? Enjoy this excerpt from Chapter 1 of Half Wolf, the first book in the series!

I was twenty-one—barely—which is all humans would have cared about when allowing entrance to a drinking establishment. But the guy at the door in a shifter bar was supposed to turn away anyone without the ability to don fur and howl at the moon. And even though I was technically a shifter, my half-human heritage meant my wolf was too weak to rise up behind my eyes and prove her worth to the bouncer.

Ugh. Not that it would have mattered if he was cute. I was on a mission and Ginger, Cinnamon, and Lia had a half-hour head start on me. I could only imagine what kind of mischief the trouble twins and their tagalong cousin could get up to during thirty long minutes alone.

“Nice to see another lady in the place,” the male offered with a triumphant leer, clearly pleased with himself for having snagged one of the few females in evidence. His words made it sound like he was trying to pick me up, but his iron grip on my bicep presented a very different picture. Ten feet in the door, I was already in trouble.

Luckily, I was up to the challenge.

“Not interested,” I replied sweetly, grinding the heel of one boot into the top of my assailant’s arch. I hadn’t dressed to impress and didn’t particularly expect my hiking shoes to make much of an impression. But I was pleasantly surprised. This particular male must have shown up at the back door in wolf form because his feet were bare. And they were also apparently quite sensitive to being stomped on.

Unfortunately, the shifter didn’t so much release me as fling me across the room to land against the legs of another group of outpack males. This time I was the one initiating the collision, and the male I struck wasn’t impressed. Snarling, he kicked me out of his path. But at least he didn’t look down.

I guess my weak wolf has a few things going for her, I thought as I struggled to my feet. There had to be at least a hundred males in the room and most of them were almost certainly outpack werewolves with no clan—or woman—of their own. A lone female like me in a bar like this was akin to lighting a match beside a powder keg then standing there tapping my foot while wondering if anything would blow.

Or perhaps the males’ lack of attention to my skinny form was the result of vastly more enticing eye candy on the other side of the room. Because I soon caught sight of my three pack mates by dint of following everyone’s gazes to a table off to the side of the bar. There, Ginger was belting out an accompaniment to the piped-in music and providing enticing visual aids to prove that tequila did indeed make her clothes fall off.

Abruptly, I found myself pushed into a corner of the room, my trajectory losing perspective as Ginger’s voice was drowned out by roars of encouragement. For a split second, I was back in the tiny cellar where I’d been stuffed by bullying pure-breeds when I was barely old enough to attend kindergarten. Dark, close, no way out. Sweat broke out on my forehead and I forced fingers between knees to stop the former from trembling.

Okay, so I’ll admit it. My knees were trembling too.

This is absurd. They got themselves into this mess and they can get themselves right back out of it.

My single glimpse of Ginger had proven that her brother was indeed at her back, ready and willing to take on the entire room full of shifters in her defense. The male twin had one hand on Lia’s arm too, proving his intent to guard his cousin as well as his sister. Still, the kid had looked scared even as she did her best to mimic Ginger’s gyrations.

So, yes, I could pretend that the three teenagers would make it out of there alive without my assistance…even if that pretense would have been a bald-faced lie.

But I just couldn’t talk myself into the mental evasion. I’d been abandoned too many times in my life to do the same for members of my own pack.

Plus, I was ostensibly those teenagers’ alpha, which meant I was in charge of keeping their flesh attached to their bones. I knew it and they knew it. Why else would Ginger have made the admittedly stupid decision to try out another shifter bar despite the fallout from her last similar attempt? Even she wouldn’t have gone off half-cocked if backup wasn’t on the way.

So I pulled a deep breath into lungs that already ached from overexertion and I pushed my way back into the crowd.

Do the twins and their cousin make it out of the bar with their alpha den mother? Find out in Chapter 1, Scene 2…