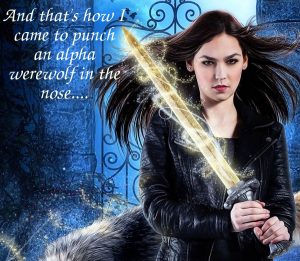 Ready to dive into a new adventure? I hope you enjoy the beginning of Wolf’s Bane...

The first time my mother spoke to me from beyond the grave, my little sister was defying gravity.

“The nail that sticks out gets hammered down,” the disembodied voice of my dead mother noted inside my head just as a very real Kira called out: “Look, Mai! I’m flying!”

Jolting at Mama’s unexpected intrusion, I swiveled to take in my sister’s long legs scampering atop the six-foot high-wall at the edge of the cemetery. I usually didn’t pay much attention to Kira’s affinity for gymnastics in high places. But it wasn’t every day a long-dead Japanese woman tapped on the inside of my skull and demanded that I take notice.

So—“Careful!” I called just as Kira’s right foot touched down on a section of wall where the weight of the hillside had pushed the cinder blocks out at an angle, ivy and dirt promising to send the unwary tumbling off her stride.

“I know what I’m doing!” my sister replied, tossing her head and rolling her eyes just like she’d done yesterday and the day before and the day before that while walking home from school. All the while human feet pranced through the debris with the agility of a fox, proving that she was right and I was wrong. My concern—and the warning from our dead mother—had been for nothing.

Or so it seemed until my sister raised her chin toward the surprisingly bright March sunshine, closed her eyes to better soak up the warmth…and ran smack dab into the largest male body I’d seen in my life.

A moment earlier, I could have sworn that the cemetery—or at least what I could see of it from the recessed sidewalk—was entirely devoid of life. But now my little sister’s shoulders were caught in the grip of hands that could oh-so-easily slide upward to settle around her unprotected neck. Veins stood out from the assailant’s rippling muscles. And I didn’t need to lift my nose to the breeze to understand what had taken place.

Kira had been waylaid by our worst possible enemy—an alpha male werewolf.