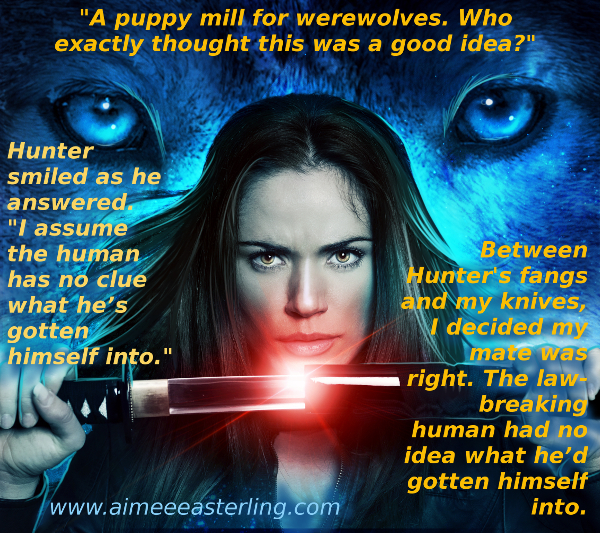 Lone Wolf Dawn is coming to Amazon very soon. While you wait, here’s the first chapter to pique your interest.

But first, a warning: Reading this chapter will totally spoil the first book in the series. So if you haven’t read Half Wolf yet, hurry up! Then come back here once you’re done.

L is for love.

And for laughable, lost, and—ultimately—lonely.

Twelve years ago, I said the L word one last time…and was promptly tossed to the curb for my efforts. After learning that lesson the hard way, I definitely wasn’t planning to backslide into stupidity anytime soon.

Not even when my mate looked at me with those penetrating amber eyes and murmured: “We make a good team.” Then ignored the fact that we were stalking prey and instead leaned forward as if for a kiss.

I certainly didn’t mind Hunter’s kisses. But something about the set of his shoulders suggested he was looking for more than simple physical pleasure this time around.

Darn Hunter anyway for his overwhelming cuteness, for his thoughtfulness, and for the way he gently but constantly begged me to reciprocate his affections.

The uber-alpha had named himself my mate a month earlier and had since waited on me hand and foot as I recovered from a gunshot wound. He’d been the rock I clung to as I dealt with losing both my small band of shifters and the alpha mantle that had allowed me to lead said pack in the first place.

The charmer had even brought home a wicked set of throwing knives to cheer me up in lieu of flowers. How sweet was that?

Still, there was no reason to descend into mushland. We were mates—we worked together and we played together. Why risk everything with words neither of us actually meant?

So, instead of giving in to my companion’s silent request, I deflected the discussion back onto the hulking warehouse in front of us. “A puppy mill for werewolves. Who exactly thought this was a good idea?”

Once again, Hunter accepted my diversion with only a faint sigh before his lips curled upward into an answering smile. “I assume the human has no clue what he’s gotten himself into.”

Something about Hunter’s tone suggested he wasn’t merely referring to the fact that the cuddly puppies inside the nearby warehouse would abruptly change into human form fourteen years after being sold to unsuspecting new pet owners. Instead, as my companion’s glance flicked to the knife I was absently tossing up into the air and then catching repeatedly, I couldn’t resist grinning in reply.

Hunter was right—the law-breaking human had no idea what he’d gotten himself into.

“Now?” I asked, glancing down at my watch. The puppy-mill owner had been inside for a good ten minutes already and he rarely waited around after feeding time ended. If we wanted to catch our prey as he emerged from the front door, then Hunter and I needed to stop canoodling and start moving into place.

“Sure,” my mate answered, already stripping out of his clothes and stashing them in the brush where we’d been hiding. After dealing with several minor and not-so-minor criminals together, we’d gotten our partnership down to a science. Hunter went in as a wolf, intimidating shifters with his sheer alpha dominance or scaring humans shitless with the size of his tremendous fangs. I stayed human and used my best weapons—words first, edged blades second.

We hadn’t lost a scuffle yet.

Of course, the current job was a little trickier. The puppy-mill owner was a one-body—human only—and thus couldn’t be made aware of Hunter’s and my dual nature. Plus, the security cameras over the door threatened to bust our world wide open if they caught a shift on tape.

Still, I wasn’t worried. Two werewolves against one weak human? The one-body’s chances were laughable.

Well, I wasn’t worried until I caught the reek of urine, feces, and unwashed mutt oozing out through the cracks between sheet-metal walls. Three werewolf pups, my inner wolf informed me, using our shared nostrils to gather sensory data that my human brain wouldn’t have been able to decipher on its own. And dozens of dogs.

I didn’t bother passing the information along to Hunter. My mate’s growl proved that he was well aware of the contents of the metal building.

Aware and thoroughly displeased about the matter. The wolf pups were bloodlings, born in wolf rather than human form and often cast out of their clans as a result. But even though they looked like animals, the puppies possessed two-legger brains within those four-legger bodies.

Hunter knew very well what that scenario felt like since he’d begun life as a bloodling himself.

The two of us were now crouched behind a row of shrubs on the left side of the front door, and I took advantage of being out of camera range to drop a hand onto Hunter’s head in a silent show of solidarity. But there was no time to soothe my mate further because heavy footsteps quickly approached the opposite side of the metal barrier. With a screech, the garage-type door rolled upward and our opponent came into view between the leaves that shielded our faces.

The owner looked like an ordinary, middle-aged guy with a receding hairline, slight paunch, and unshaven jawline. But my wolf snarled within my belly as we took in his odor. It was subtly off, reeking of greed and sadistic pleasure with just a hint of madness swirling deep down underneath.

So I didn’t hesitate to pull my second knife out of its boot sheath and step up behind our mark. Then I crossed both blades over the human’s Adam’s apple and pulled in so tightly that they indented the skin.

“Not so fast,” I whisper-growled as the man tried to jerk free.

My inner wolf begged me to let the sharp edges bite deeper, to draw a little blood. But I shushed her and merely shoved the human back through the doorway he’d been about to draw closed.

“It’s time for us to have a little chat,” I informed him.