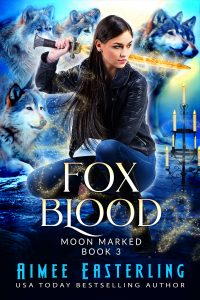 “He’s besotted with you.”

The voice curling over my left shoulder sounded pleasant, but it wasn’t. Instead, my instincts screamed “Angry werewolf behind you. Careful!” one second before I swiveled around with a fake smile pasted on my lips.

“Edward. Left your posse behind, did you? Braving the scary kitsune all on your lonesome?”

Because the middle-aged male who’d been Gunner’s principal ally in the battle against Liam was apparently not my greatest supporter. Moments earlier, Edward had stood at the center of the huddle of unhappy shifters shooting angry glances in my direction. So the fact he’d come all the way across the room to engage me likely meant he had an ultimatum to drop on my head.

Meanwhile, the rotten-egg aroma that permeated my cottage was so strong now I could only conclude it emanated from this shifter. It couldn’t have been his signature aroma, however, or someone would have warned me about the foul stench.

“Bad choice of cologne,” I noted even as he grabbed my arm and drew me into the dimly lit hallway with a grasp so bruising I had to fight down a flinch.

“This pack is barely hanging together,” Edward growled as soon as we were out of easy earshot of the rest of the partygoers, not bothering to comment on my snarkiness about his scent. “Liam was important to us and now he’s gone. Ransom was an asshole, but the transition away from him is still difficult. We don’t need you here making things more complicated. If you love Gunner, you’ll leave him alone.”

I wanted to snipe right back…but, unfortunately, Edward hadn’t said anything I didn’t already believe to be truthful. On the other hand—“Gunner asked me to come here. So I came.”

As I spoke, I stared at the hand clenched around my arm until Edward realized what would happen if his pack leader saw the lines of parallel bruises welling up beneath his fingers. Reddening, he shrank back so rapidly I might as well have swiped at him with my sword.

“Shit,” the male muttered under his breath. “If he smells me on you, he’ll go berserk.”

This, at least, I was prepared for. Reaching into my pocket, I pulled out an aerosol can of scent-reducing compound, spraying it liberally across my injured flesh.

“I’m not here to make your life difficult,” I said as I worked, the chemical drifting up my nose in the process so I had to pause and stifle a sneeze before I could go on. But then I returned to the most important business—clarifying my place within the Atwood pack. “I’m here to support Gunner,” I continued. “And if you care about the clan, you’ll let me get on with my task.”

Which was all very true even though the words sat between us like a lump of brussel sprouts on the plate of a picky toddler. If Edward wanted the Atwood clan to hang together, he’d make nice and pretend he didn’t have a bone to pick with the pack leader’s mate.

I could tell from his scent—no longer quite so harsh and astringent—that Edward had gotten the message. Unfortunately, werewolves have a hard time dropping a juicy bone. “What happened four months ago…”

“Was the fault of an Atwood werewolf,” I interjected, not wanting to remember the awful battle of wolf against wolf fueled by the kitsune magic of my dead mother. “I would never do anything to damage this pack.”

The vigor of belief added volume to what was meant to be a private conversation, and this time I really did wince as my words rang a little too loudly in the echoing hall. Shit. I’d intended to say my piece to Edward then let him propagate it through the pack at the speed of werewolf gossip. I hadn’t intended to create a scene.

Ignoring the shifter beside me, I swiveled just as I’d done while walking up the path with Kira. Unfortunately, this time I wasn’t lucky enough to find our surroundings devoid of life. Instead, a tall, broad-shouldered werewolf towered in the open doorway between hallway and living room, silhouetted against the light behind his back.

“Something the matter?” Gunner demanded, taking in our proximity, our stiff-legged anger, the strange floral overlay of the de-scenting compound.

“Of course not,” I lied. “Edward was just giving me the recipe for his famous lasagna.”

Grimacing in what was clearly meant to be a smile, the male in question played along. “The secret,” he offered, “is in the sauce.”

“Hmm,” Gunner started, far from satisfied. Only he had no time to debrief us further, because the living room behind him erupted into howls, growls, and one long, quavering scream.