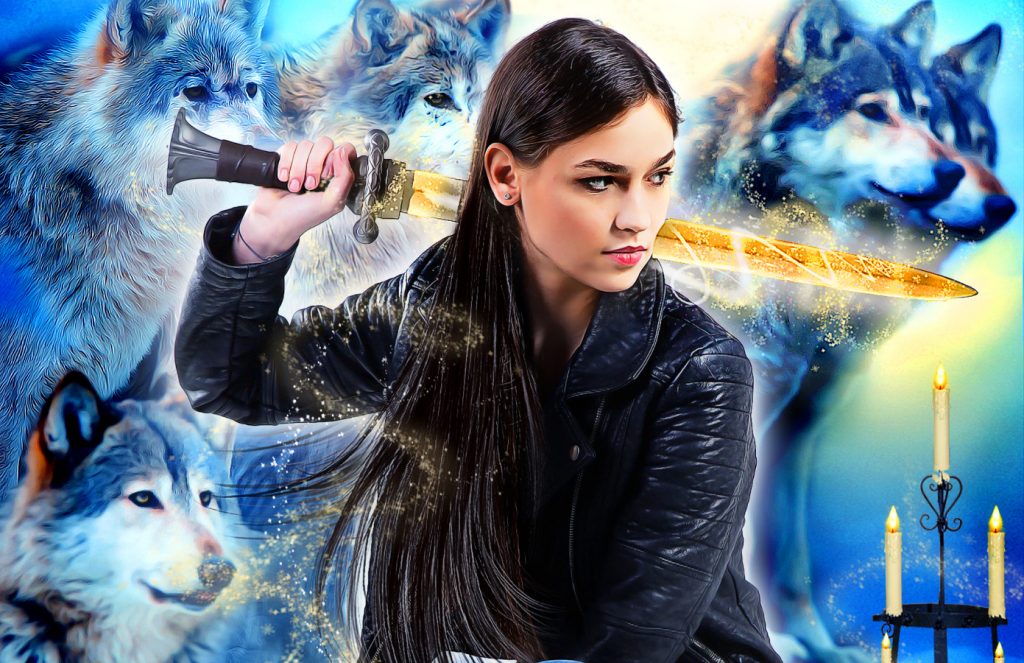 The boxes were on the ground and my sword was clasped in white-knuckled fingers before several sets of hands—at least they were furless—yanked my sister into the death trap. But I was four steps too slow to prevent them from enfolding her into their midst.

Enfolding her…and flipping on the light switch to reveal smiling faces and party banners. Apparently my attempt to move in after sunset hadn’t been as secretive as I’d initially supposed.

“Surprise!” werewolves howled, only some of the voices human. Then a whoosh of displaced air warned me of Gunner’s presence half a second before a large hand tucked itself into the small of my back. He guided me through the doorway, my sword reluctantly dissolving into the magical ether even as I did my best to paste a pleased smile onto my face.

“I take it surprise parties aren’t your favorite,” Gunner huffed into my ear while his free hand massaged tension out of my neck muscles. And even though I was bound and determined to give Gunner every opportunity to rebuild his splintered pack without our relationship derailing his efforts, I still found myself swiveling so his guiding arm turned into half of a hug.

“No, I’m not generally a fan of surprise parties,” I agreed. “But I am glad to see you.” After all, it had been nearly three weeks since we’d spent more than five minutes in close proximity. No wonder his fingers on my bare skin acted like balm. I melted into his arms, forgetting my worries as I tilted my head back in preparation for a kiss.

Only, no kiss was forthcoming. Instead, Gunner released me and pulled a small notebook out of one pocket.

“I’ll be sure to remember that in case it comes up later,” he said. And even though cold air where warm hands used to be explained the sudden rise of goosebumps along my exposed forearms, my shiver was out of proportion to the chilliness of the night.

Blinking slowly to tamp down my frustration, I stood up on tiptoes to peer at Gunner’s notebook. And what he’d written returned the smile to my face. “My place tonight once Kira’s sleeping?”

No wonder he hadn’t wanted to even whisper the words in the midst of the pack where shifter ears were bound to overhear him. My cheeks heated even as my head snapped up to peruse the partygoers. Somehow I was positive every werewolf present had read Gunner’s words right alongside me….

“Maybe,” I answered, trying to decide whether I trusted Atwood shifters enough to leave Kira alone in the cottage after night fell.

“Oh, that reminds me,” Gunner interrupted, raising his voice until it was loud enough to be heard at the far end of the overcrowded living room. “New rule—all disputes must be settled with blades hereafter. Tournament rules, to first blood.” Then, as someone near us complained that he knew nothing about blades, that swords were archaic. “If you need instruction, I recommend asking our new sword master for tips.”

Gunner’s hand settled against the small of my back, subtly pushing me forward. And once every eye was upon me—exactly what I’d hoped to avoid by taking the walk of shame with my sister—the pack leader added: “Don’t forget to pay her. Old Red needs new brakes.”

Then just like that, Gunner left me alone in a room full of werewolves with nowhere to hide and no choice but to follow him deeper in.