Will a family-focused werewolf trade her entire pack for a brother she’s never met?

Ember’s large werewolf family has always been both her anchor and her support. But when a missing half-brother draws the twenty-something away from home for the very first time, bonds to her family are tested at every turn.

The milk-chocolate eyes of an off-limits human are the first threat to her pack commitment. Meanwhile, the local alpha is less interested in dark dangers facing human women and more intent upon eliminating his guest’s ability to leave his territory ever again.

Can Ember protect innocents and track down her elusive sibling in time, or will the not-so-charming alpha cut off all ties to her home pack? 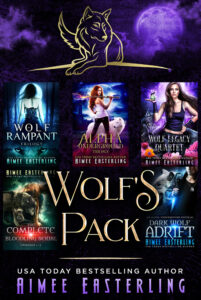 If you want every single related story, from novel to flash fiction, your best bet is Wolf’s Pack.