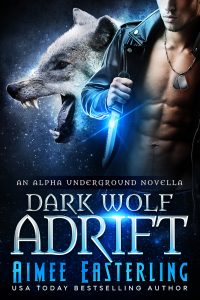 I am excited to have Dark Wolf Adrift live and thought you might like to read the first chapter of this prequel novella (which can also be understood as a standalone). Enjoy!

Not because I can shift back and forth between human and wolf skins at will. Although that part’s true.

And not because I served eight years as Special Ops in the U.S. military. Although that part’s true as well.

My monstrosity doesn’t stem from the fact that I stood taller than the other guys I walked beside, broader across the shoulders due to a childhood spent as a bloodling in lupine form rather than as a fur-less one-body.

No, it wasn’t pure physical brawn that pushed me over the edge. Being a monster is all about state of mind. And when I caught a whiff of strange werewolf within my usual stomping grounds, my thoughts were monstrous indeed.

A headless intruder, flicker, sweet blood pulsing out of the male’s neck and down my throat, flicker, crimson-tinted teeth parting as I howled my displeasure at the moon.

“Did you just growl?” asked my human partner.

I couldn’t be bothered to spare a glance for Stooge or for my other EOD crew mates, all of whom were off duty just like me and enjoying an evening out on the town. Instead, my eyes remained fixed upon the shifter who faced me from the other end of the city block.

Around us, the usual post-work-day traffic flowed, full of city dwellers blithely oblivious to the dangers that stalked through their midst. A child laughed in the distance, a radio flicked on from a second-story apartment, car horns trilled down the street. But my fellow werewolf and I remained locked in a silent battle of wills.

I shook my head to clear it of my own pent-up alpha aggressions. Our territory, my inner animal complained. But by shifter law, I didn’t actually own the streets I walked upon. This city was outpack land, free for all.

Or was that a free-for-all? I bared my teeth, hoping the other male would take the hint and back down before I was forced to track the intruder to his lair and rend him limb from limb. If he accepted my greater dominance and walked away now, I was willing to be the bigger wolf and let him escape with both of our egos—and skins—intact.

“Hunter?” one of my human companions nudged me verbally. “Is something the matter?”

“An old friend.” I forced the words out between curled lips, stalking toward the stranger who was pacing forward just as rapidly to meet me.

To a human or to a run-of-the-mill shifter, my opponent would have appeared to be a tall but otherwise average redhead, smiling cordially as he approached. But my bloodling nature instead picked out the inner wolf hidden beneath his furless skin.

The beast’s ruff was raised aggressively and its teeth were exposed in a near-audible snarl. No, my enemy hadn’t taken the hint. Instead, his monstrous half was wide awake and ready to pounce.

I walked faster, trying to distance myself from my friends. Because while they were burly and well-trained by human standards, the guys were no match for an unfriendly werewolf. So I didn’t glance backwards as I ordered the other members of my crew to: “Wait here.”

Six humans and I had all left the base together an hour earlier. Of those, five now took me at my word, pausing so I could pull ahead and leave them behind and out of harm’s way.

My wingman, though, wasn’t to be deterred so easily.

Paul was more frequently referred to as Stooge due to his tendency to turn every occasion into a circus act. But he was adept at picking up on subtle cues of posture and tone, so he didn’t join our mutual buddies on the corner. Instead, he scurried to stay abreast of me as I barreled toward the other shifter. “Are you in trouble?” my friend demanded.

My opponent was only twenty feet distant by this point, his eyes nearly glowing with unbridled hostility and rage. His lips spread into a wide smirk of preemptive triumph and I could feel the wolf beneath his skin itching to break free and take matters into its own paws.

Yep, the dunce really was planning to launch into a knock down, drag out battle in lupine form right here in the middle of a human neighborhood.

“Not now, Paul,” I said, using my friend’s given name in an effort to dissuade him from continuing to dog my heels. It was going to be hard enough to rid myself of this shifter without cluing in the general neighborhood to our furry natures. And since the law against letting our secret slip to humankind was more of a death sentence for the human in question than a taboo for the werewolf, I couldn’t risk meeting my opponent beneath Stooge’s eagle eye.

“Could you give us a little space,” I continued. “Please.”

Darned question marks. I kept forgetting to add them to my auditory repertoire.

The thinly veiled command did the trick, though. “We’ll be right over here,” Stooge acceded, clapping me on the back before retreating to join the rest of our friends halfway down the block.

I could feel the team hovering, eyes boring into my shoulder blades. But the majority of my attention remained focused on the danger in front of my face. The danger who could so easily shake up the status quo by shifting here on a city street full of innocents.

A city street full of innocents who I was duty bound to serve and to protect.

A family might come around the nearest corner at any moment. Or perhaps Stooge’s patience would wear thin first. Either way, I knew I lacked the time and space for finesse.

So I simply blasted my opponent with such extreme alpha dominance that I could smell the reek of urine as he wet himself. “Get out of my city and don’t come back,” I commanded.

My words were the equivalent of snapping on handcuffs and stuffing a jaywalker into the back of a cop car—high-handed, arrogant, and impossible to argue with. It was overkill, I knew. I hadn’t even asked for the male’s name, hadn’t tried to sit him down and reason with him, hadn’t mentioned the fact that I currently spent 99% of my time on the human-only base and could easily share this city with one outpack drifter as long as he kept his nose clean.

But I’d done all of that and more in the past. The trouble was, my uber-alpha status made me a magnet for weaker wolves trying to get a leg up in the shifter hierarchy, meaning I’d already fielded dozens of out-of-the-blue dominance displays during my not-so-extensive span of adult life. And in the end, it always came down to one simple question—whose wolf was the biggest asshole?

Today, like every other day, alpha assholery worked like a charm. The air around us chilled as the other shifter’s inner beast shrank down, becoming nearly invisible within his human form. His eyes skittered to the side and sweat broke out on his brow as he tried…and failed…to avoid my inescapable compulsion.

We could have stood there all day, the red-headed shifter giving himself a hernia while I relaxed into my intended role in werewolf society. But, instead, I glanced aside at last and released him from my spell.

Immediately, the once-belligerent shifter turned on his heel and ran like the fires of hell were on his tail. Yes, he ran like a bully who had learned the hard way that bigger bullies existed, or perhaps like a six-year-old kid who’d just discovered that the monster under his bed was very much real.

And as the monster in question, who was I to say he was wrong?

Want just a little more of Dark Wolf Adrift before purchasing the entire novella? Read the beginning of Chapter Two…