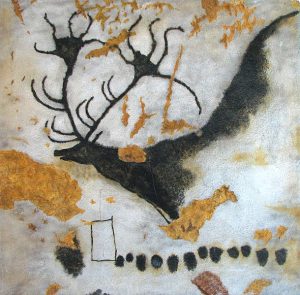 “No, absolutely not!” Patricia proclaimed, waving the paper wildly in front of her face without taking in the fact that she was one step away from being menaced by a weapon.

“What is it?” This was Joe, my people-pleasing kid-genius. He paled as he scanned the handout someone thrust toward him. “Due Wednesday?” he groaned, no less horrified than Patricia was. “That doesn’t even give us time for interlibrary loan.”

I wanted to tell him that he didn’t need interlibrary loan—there were thousands of volumes in our own library and millions of articles in our online system. But I didn’t want to draw anyone’s attention to the armed intruder. Not when the ensuing panic might result in somebody getting shot.

Instead, I took a chance that I was reading the situation properly. I snapped my fingers at my inherited raven even as I dove into the scrum.

“You don’t understand…” one student started.

“Here, this is for you.” A bright red apple perfect enough to have graced a teacher’s desk in a comic strip was thrust into my hands.

“Thank you,” I told the blushing teenager, sliding past to lead the mass of youngsters like goslings toward the door.

Behind me, the rustle of wings was met by a grunt of annoyance. Ever since inheriting Adena from my predecessor, I’d spent my evenings training her to land on shoulders when commanded. Surely the stranger would find it hard to pull and fire a pistol when weighed down by a two-foot-tall bird.

Of course, a perching raven wouldn’t stop a determined gunman. But my gut said this wasn’t a school shooter. This was a man reacting to past trauma by drawing upon his only available resource.

Or so I hoped. I couldn’t hear whether or not the gun emerged from its holster. Instead, Patricia was nose-to-nose with me now, her piercing voice overwhelming all other sounds.

“You said there was going to be a test!” she snapped. “Multiple choice. Easy peasy. It’s on the syllabus!”

“No, it’s not,” I countered. “If you’ll check again, you’ll notice the line in question says ‘TBD.’”

Immediately, three students began pulling up evidence on their cell phones. “TBA, actually,” reported the most pedantic of my followers. In reaction, Patricia raised her claws in preparation for tearing out his eyes.

I didn’t think she was angry enough to follow through on her threat, but these were my students. I was responsible for their wellbeing. So I threw myself between Patricia and the object of her ire…only to thud up against a huge body that had gotten there first.

A minute ago, I’d been positive Craggy Face was standing on the far side of the lecture hall. I’d felt his eyes like icy fingers running up and down my spine.

But I must have been mistaken. Because the man in question was now gripping Patricia’s shoulders in a manner that was entirely platonic but nonetheless went against the department’s code of ethics. His face was even more terrifyingly intent than it had been when I woke from my vision, angry russeting making the scar around his neck stand out in stark relief.

I think he even growled, a rumble that sounded more animalistic than human. Patricia had chosen the wrong day to mess around.

Which is exactly when Dr. Dick Duncan, department chair and pain in my ass, chose to stroll down the hall toward us. His eyebrows rose as he took in the scene in my classroom, and I could see my job disappearing without a trace.

Here’s what I’d learned about Dick during the semester he’d been my de-facto manager:

His area of expertise was Roman archaeology but I was pretty sure he hadn’t bothered to so much as skim new literature during the preceding decade. “Archaeology is all old,” he’d told me when I pressed him on the issue. “There’s nothing new under the sun.”

As if that wasn’t bad enough, the wispy-haired stick-in-the-mud had set himself up as my mentor when I first entered the department. Then he’d quickly turned against me when it became apparent I knew more than he did about modern field techniques.

“You weren’t what he expected,” our department secretary Suzy had explained last week as she and I chatted around the water cooler. “He thought a newly minted PhD—especially one as young as you are—wouldn’t be up to speed until his retirement. Then he’d look like a hero for molding such a perfect professor as his replacement. The trouble is, you’re already better at this gig than Dick was in his prime. Now he’s starting to look like an idiot in front of the rest of the staff.”

Worries about his professional reputation aside, the department head possessed all the power in our relationship. And the expression on his face when he took in the circus-like ruckus in my classroom resembled nothing so much as anticipatory glee.

I took a deep breath and channeled my father. “Mr. Wolf, take your hands off that student,” I barked, making up a name on the spot that seemed to match Craggy Face better than the moniker I’d been using for him previously. “Ms. Owens, the paper is due next week, no ifs, ands, or buts about it. This should be an easy assignment after everything you’ve learned in my class.”

If Patricia had been a dog, her ears would have pinned back and her tail would have tucked in submission. She wasn’t used to being yelled at, and I felt a little bad for taking her to task.

The huffed laugh from “Mr. Wolf,” however, reminded me that Patricia and I weren’t the only ones present. So I addressed the rest of the students in a slightly warmer manner, reminding them that my usual office hours would be shaken up during exam week. “If you have any questions,” I finished, “please don’t hesitate to email or call me. You know I’m always willing to help.”

Then they were gone. My pupils, the department chair, and every single one of the handouts. I’d printed three extra papers and there’d been two absent students, so simple arithmetic suggested there should have been five handouts left on the table. But…

“I’m pretty sure Apple Kid took the last handful to build into a shrine.”

That was Mr. Wolf, still very much present as he pushed himself further than he properly should have into my personal space. His scent enfolded me, mossy and enticing, and my skin tingled as if I’d been stroked…or wanted to be.

Yes. Pet us, whispered the monster deep in my belly. Shaken by the feeling I wasn’t entirely in control of my own internal dialogue, I forced my eyes aside to take my first proper look at the second man.

The gun was gone. Adena perched on his shoulder like a pirate’s parrot. But he didn’t appear at all piratical. Instead, the stark black bird added to the stranger’s handsomeness to turn him into a fairy-tale prince in appearance, all blond hair and blue eyes.

“Ma’am, I apologize for earlier,” he started. “I can assure you, nothing like that will ever happen again.”

I nodded absently. I’d known he wasn’t really dangerous—my monster had somehow smelled it on his breath.

“Apology accepted,” I answered. But my attention kept returning, like a heat-seeking missile, to the man with the saber-tooth fang around his neck.

“Now you’ll tell us where you went,” Mr. Wolf ordered, not bothering to turn his query into a question. His eyebrows were so dark they almost became a brow ridge when they V’ed downwards. But he was no Neanderthal. His eyes possessed the intensity of Homo sapiens sapiens and I got the distinct impression he was aware of the monster lurking beneath my skin.

Perhaps that’s why I started spitting out my secret. “I…the cave…” I answered without thinking, halting only when that familiar glimmer of disappointment rose behind his pupils.

Of course. Mentioning my visions wasn’t the way to assert my sanity.

Mad at myself for the slip, I turned to the other stranger as I tried to nudge them both out the door. “Can I help you? I assume you dropped by for a reason other than to draw a gun on my students?”

“That was a mistake, Dr. Blackburn,” Prince Charming started. Which is when I remembered he’d used my predecessor’s name the first time he’d spoken to me also.

These men didn’t want me. They wanted Dr. Frank Blackburn, who had died of a heart attack so close to the start of the semester that no one even bothered to clean out his office before I moved in. I’d inherited his classes, his bird, and apparently his problems in the form of these two intruders.

“I’m afraid you’re mistaken,” I said, hating the fact that my voice quavered slightly. The trouble was, Mr. Wolf—still silent—continued circling me like a turkey vulture homing in on a piece of choice roadkill. At the moment, he was behind my back…and being unable to see him made me so twitchy it was all I could do to meet the speaker’s eyes.

Oops. That was more information than they likely needed or wanted. Plus, I couldn’t hold myself still any longer, not when I could have sworn I felt hot breath drifting across the nape of my neck.

Whirling, I found myself face to face with the larger stranger. Or, rather, face to scar-encircling-his-neck.