Those of you who’ve read Verdant Magic will be familiar with the heroine for the book I’m currently working on. Sabrina Fairweather is the captain of an airship…and in Cerulean Magic it was time to give the captain a crew. But how many employees would Sabrina need and what would each one do?

I started my research by determining how many crew members an airship of a similar size from early in the twentieth century might include — twelve. Then I sat down with my husband and picked his brain about how those crew members might be arranged. Here’s what we came up with: 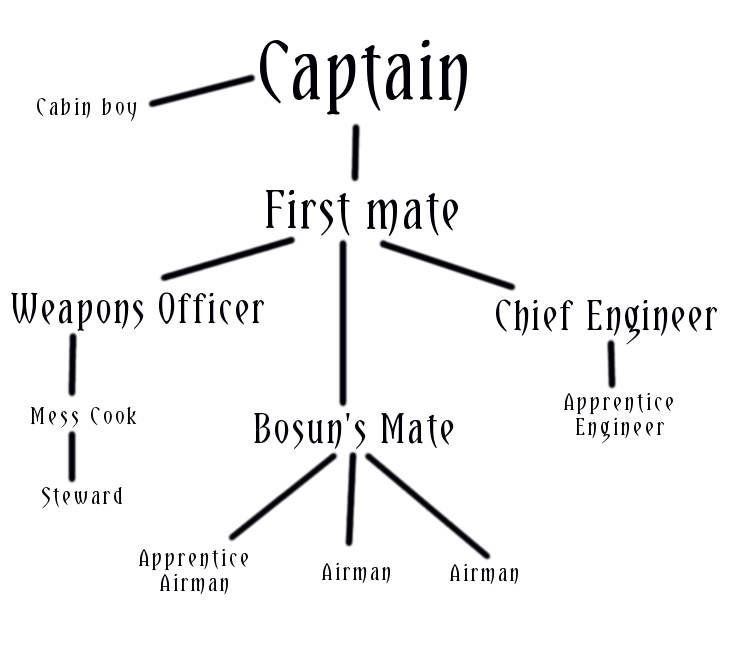 My husband informed me that it’s all about the chain of command. The Captain, of course, is too busy for anyone except the Cabin Boy (general dogsbody) and the First Mate to report to her directly. So the First Mate is usually the Officer of the Deck (basically, the guy in charge), although but he’d trade off that duty to the Weapons Officer to stand night watch.

What does everybody else get up to during a normal day in the air? The Chief Engineer and his apprentice would keep the ship running, easier on my airship than on the 1923 prototype because there are electric motors and batteries rather than an internal combustion engine. Meanwhile, the Mess Cook and Steward would be in charge of feeding the crew, managing the ship’s store, and cleaning up after everybody.

In contrast, the unwashed masses all serve under the Bosun’s Mate, who is less of a gentleman than the other officers. His airmen would keep busy “humping stores” (carrying on cargo) while in port, then managing the balloon, anchoring, and doing all of the other things too messy for the officers to get their hands dirty with once the Intrepid is in the air.

What about during times of war, when the order “General Quarters” would send sailors scurrying to their battle stations? I guess you’ll have to put Cerulean Magic on your to-read list and wait until May to find out.