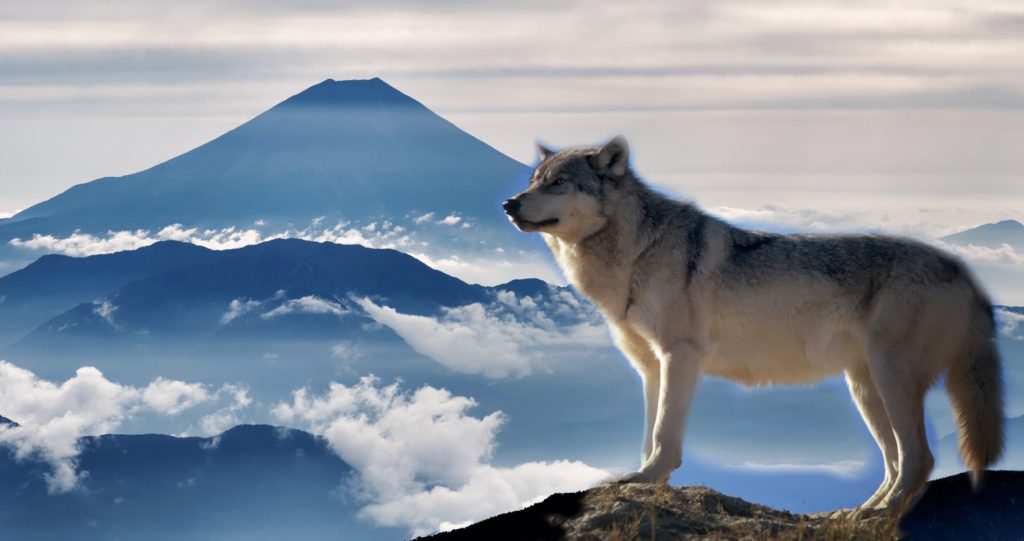 At a pull-out during my recent Yellowstone wolf tour, one of our guides ended up chatting with an expert on Japanese wolves. The story relayed was so fascinating that when I got home I had to fact check and share.

The tale begins long ago when wolves were revered in Japan. The dictates of Buddhism had led to a human diet that was largely vegetarian (with fish sometimes added to the plate). Wild animals were occasionally hunted by the lower classes, but livestock were few and far between.

In this landscape, wolves were helpers rather than hinderers. Two subspecies — the Japanese wolf (Canis lupus hodophilax) on the southern islands and the Hokkaido wolf (Canis lupus hattai) on the northern island — dined on deer and boar that ate/tore up rice and vegetable fields. No wonder wolves made their way into myth as friends rather than foes. In fact, the people of the northern island sent dogs in heat into the forest to breed with wolves in hopes of adding more lupine traits to their domesticated stock.

The tone of the story shifts in the late nineteenth century when a Japanese emperor decided to ditch a dependence on rice farming and fishing and try out American-style ranching. Wolves and livestock are a tricky combination. Soon, wolves turned into pest creatures and were exterminated.

Fast forward ahead to the modern era, when scientists began sequencing the DNA of the few stuffed specimens of Japanese and Hokkaido wolves left in museums. In the process, they discovered that the shrimpy Japanese wolf had arrived in Japan — as you might expect due to proximity — from Asia.

On the other hand, the larger Hokkaido wolves were more closely related to a North American subspecies. Scientists now believe that these leggier wolves migrated westward along the Bering land bridge about 9 or 10,000 years ago, not long after humans headed in the opposite direction onto the North American continent.

Both subspecies, unfortunately, are now very much extinct. However, you can see wolves a lot like the Hokkaido wolf along the coast of British Columbia, since scientists believe the more northern Japanese wolf subsisted just like these do on a diet of marine and terrestrial prey at the edge of the water. Not so different from the ancient Japanese people who once called these wolves friends.