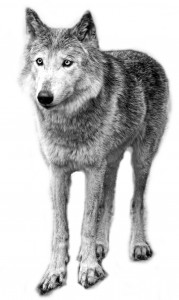 How much do you know about wolves? Here’s a quick summary of the most fascinating points from Barry Holstun Lopez’s Of Wolves and Men to get your imagination soaring.

Wolves can live for a week without food and can travel for twenty miles without resting. In the winter, they average 30 miles traveled per day and one pack was reported traveling 125 miles in one day.

The lupine digestive system is made for feast and famine cycles. Wolves won’t eat for three or four days straight, then they’ll gorge on up to 18 pounds of meat, will nap for a few hours, then will gorge again.

What you see is what you get

An expert can tell a female wolf from a male wolf even from a distance. Females average five to ten pounds lighter, their hair is often redder, and their leg hairs are smoother.

Not every wolf is created equal

The Iranian wolf is small, doesn’t howl, and travels alone or in very small packs. Worldwide, there are 37 subspecies included in Canis lupus.

The canine lineage split away from the feline lineage when the former moved onto plains and lost their retractable claws. Yes, that does mean your cat has a reason to feel superior to your dog.

The average wolf pack contains five to eight members, but packs ranging from two to thirty-six wolves have been sighted.

The pack often breaks up after breeding season, but they drift back together to raise the pups as a unit.

There are three hierarchies within a wolf pack — the male hierarchy, the female hierarchy, and a both-sex hierarchy. A wolf’s ranking is often age-based (the older you are, the more dominant you are).

The pack’s social structure can be entirely reversed in play. But the dominance hierarchy is important for determining breeding, feeding, travelling, and territorial maintenance.

In the wild, an alpha wolf scent marks or inspects previous scent marks every two minutes, hitting every point in the territory at least once every three weeks. Markings are concentrated at trail junctions and may be primarily used to help younger wolves map their range and to communicate with absent members.

The omega wolf is often the previous alpha or beta (second in command), and his treatment seems to coincide with how he treated his underlings in the past. If he was a good leader, he’s treated well; if a bad leader, he’s treated badly. The omega follows the pack at a distance and is sometimes allowed to help drive off trespassers or even to rejoin the pack.

Only one female in each pack has pups each year. This alpha female is in charge of choosing the denning site, which determines the entire pack’s territory for four to five weeks.

Wolves first howl at four weeks old…if they live that long. The species has a 60% mortality rate between birth and adulthood.

The average life span of a wolf in the wild is 8 to 9 years.

Howling is used to assemble the pack for a hunt, to call the alarm, to locate distant members, and even to synchronize moods from a distance.

A wolf’s howl can carry up to six miles.

Wolves don’t bark much. But when they do, a bark is a warning.

In hot weather, wolves lie in bodies of water to cool off and they also become nocturnal in the heat.

Some scientists believe that wolves hunt more by sound than by smell, although they can sometimes scent prey from a couple of miles distant. In fact, wolves aren’t that great at detecting faint odors, although they are quite adept at discerning subtleties within odors (your pee vs. my pee).

Wolves kill trespassers of their species, especially if the latter threaten their pups. They also kill pups who act strangely and they may kill injured pack mates. Despite the apparent bloodthirstiness of those observations, wolves usually work out issues ritualistically within the pack.

The Eskimo believe that certain wolves in a pack never kill while others specialize in small game.

Yes, almost every item on this list gave me an idea for a story! How about you?