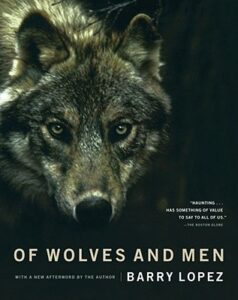 Of Wolves and Men was written shortly before I was born, and small parts of it are dated. However, the overall theme of the historical human relationship with wolves stands the test of time.

My favorite sections involved the intersection of Native American and wolf culture. Both two-legged and four-legged hunters would stalk antelopes in Wyoming by lying low in tall grasses, twitching their tails to draw in curious prey animals. Elsewhere, both wolves and people hunted bison by chasing them out onto lake ice where they’d slide around and become easy to kill. And Lopez suggested that deer responded similarly to both wolf and human territories, sticking to the disputed space along borders where neither hunter was likely to go.

Another favorite part of the book was when the author recounted an experience tracking a wolf and a fox. The former had made a kill alone and was preparing to cache the meat it couldn’t cram into its stomach for later, but the wolf knew a fox was hanging around waiting for scraps. So the wolf traveled in crazy loops, hopping through puddles and generally going to great lengths to hide its trail before digging a super-secret cache.

The fox got the meat anyway.

Other tidbits: I was intrigued to learn that the metal spikes on dog collars were originally envisioned as protecting dogs against wolves. And howls may be used, among other things, as a “mood-synchronizing activity.”

I’ll let you dig deeper into the book yourself but will provide one warning. The third section is about human attempts to eradicate wolves and it’s a tough read. You might skip straight over that and head into the folklore near the end.